Midway through the credits rolling at the end of 2018’s Venom, the screen cut to Tom Hardy’s Eddie Brock going to visit someone in San Quentin prison. That someone turned out to be Woody Harrelson, sporting a shock of curly red hair and a prison jumpsuit, and creeping it up from the inside of a cage that’s right out of Silence Of The Lambs. His name – though not directly mentioned – is Cletus Kasady, and he’s a serial killer, which you could guess from the cage, and the fact that he writes Eddie’s name in blood on one surface. Despite that, “Red” asks they forego the creepy serial killer thing, but then claims that when he gets out, there’s going to be “carnage”.

Those who aren’t big readers of the Marvel comics where Spider-Man, Venom and their associated comics spring from might have been left scratching their heads at the word. And now that the sequel – which we already knew would see the return of Harrelson’s character – is titled Venom: Let There Be Carnage, it’s high time we offer a handy guide on who exactly the villain is…

Where did Carnage start?

Venom had already made a name for him – well, itself – when the space symbiote arrived in the pages of Amazing Spider-Man #300 back in 1988. Given that success, Marvel decided to exploit further symbiote creatures, and Carnage, created by writer David Michelinie and artists Erik Larsen and Mark Bagley, entered the fray in 1992’s Amazing Spider-Man #360. Created to be a darker character than even Venom (who has been something of an anti-hero in his time and is certainly the protagonist in his solo films), the merged form of serial slaughterer Cletus Kasady and an offspring of Venom was created when the sprog was left in his cell. This creature bonded with Cletus via a cut, which explains his red colour, as surges through the man’s blood. And yes, in the comics, Eddie and Cletus shared a cell at one point.

Who Is Stronger – Venom or Carnage? Carnage’s Powers and Abilities

Carnage is basically a meaner, stronger version of Venom. His costume is an offshoot of the Venom symbiote, and like Venom, Carnage has access to amped-up versions of Spider-Man’s powers, such as boosted strength, agility and speed. Like Venom, Carnage can block out Spider-Man’s Spider-Sense, even while he has access to enhanced senses of his own.

However, because Carnage’s symbiote gestated on Earth rather than the planet Klyntar, it’s stronger and more unstable. Carnage is powerful enough to fight both Spider-Man and Venom to a standstill. He can reshape his symbiote tendrils into various deadly weapons and even launch them as projectiles. The symbiote also grants Kasady a Wolverine-like healing factor, allowing him to survive what seemed like certain death on multiple occasions. 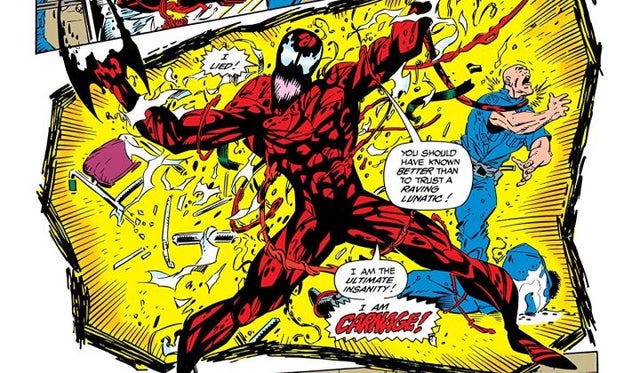 Fortunately, Carnage does have weaknesses. He’s not as susceptible to sonic weapons as Venom, but he is even weaker than Venom is when faced with fire. He’s also extremely vulnerable to the touch of Anti-Venom, a hero whose entire purpose is to hunt down and destroy symbiote. And in Venom 2, director Andy Serkis says Carnage’s powers are somewhat different, including the ability to turn into mist!

Who has also bonded with Carnage?

Much like bubblegum to a shoe, a symbiote will always stick to something it desires.

The aforementioned Absolute Carnage event introduced a new version of Carnage to the Marvel Universe that had been bonded with the Grendel symbiote and manipulated by the symbiote god Knull to become Dark Carnage.

Not only was Dark Carnage larger and more powerful than previous versions, but the rotting yet living corpse of Cletus Kasady was also able to use maggot-like pieces of the Grendel symbiote to enslave others, including Miles Morales/Spider-Man.

One of the biggest storylines to feature the character crossed several Marvel Spidey titles for the event known as Maximum Carnage. It saw the red danger allying with characters such as Shriek, a Spidey clone named Doppelganger, demonic creature Demogoblin and death-dealer Carrion. They essentially took over New York City, killed many people and required a huge group of heroes to stop them.

The multiversal species known as the Poisons harvest symbiotes in order to consume and take over their hosts, essentially becoming corrupted Venomized versions of their former selves, meaning the Poison army was full of powerful multiversal heroes and villains.

Following the lobotomization of Cletus Kasady by Scarlet Spider in Minimum Carnage, he is taken by the Frightful Four, and the Carnage symbiote is forcibly removed and bonded with the unwilling criminal scientist Dr. Karl Malus.

During Peter Parker’s clone Ben Reilly’s tenure as Spider-Man, he encountered the Carnage symbiote when it was using John Jameson as a temporary host, though it quickly abandoned him and attempted to bond with Reilly to become Spider-Carnage.

While Reilly was able to retain control long enough to separate himself from the symbiote, we still love the design and Spider-Carnage’s nostalgic appearance on Spider-Man: The Animated Series.

Cletus Kasady isn’t the only villain to bond with the Carnage symbiote as we saw in the “Go Down Swinging” storyline. Norman Osborn/Green Goblin was able to get his hands on the Carnage symbiote, and bonded with it and his Goblin Formula to become the Red Goblin.

As the Red Goblin, he then proceeded to take down Spider-Man and his closest allies before Peter Parker rebonded with the Venom symbiote and was finally able to separate Norman from the Carnage symbiote.

Did Carnage ever die?

Spreading his tendrils across several titles and storylines, there was a concern in 2004 that Carnage had become somewhat overexposed. Ripped in half by Robert Reynolds (AKA Sentry), he was left to die in the cold vacuum of space. But no one really dies in comicbooks, and Carnage was back causing trouble in 2010 for several storylines, including one in which he’s portrayed as a hero. One famous storyline saw him bond with Norman “Green Goblin” Osborn to form the Red Goblin, which required Spidey to take him down.