Crocodiles are generally aggressive, but not in the town of Paga. This small town in northern Ghana, nestled right up against the border of Burkina Faso, is home to some of the most docile members of this fearful predator species. They live in the Paga Crocodile Pond, about forty-four kilometers from Bolgatanga, the regional capital, where they swim merrily along side young children while their mothers wash clothes on the banks. No one has ever been harmed by any of the crocodiles. The crocodiles are equally respected by the villagers who believe that the soul of every native of the village is carried by these animals. They claim that whenever any important personality in the village dies, it is followed by the death of one of the sacred crocodiles.

According to the local folklore, a long ago a hunter was trapped between a pond and a pursuing lion. He made a bargain with a crocodile in the pond that he and his decedents would never eat crocodiles if the crocodile helped him cross the pond and escape from the lion. The crocodile agreed and helped the hunter to cross the pond. The hunter built a house there and established a village. 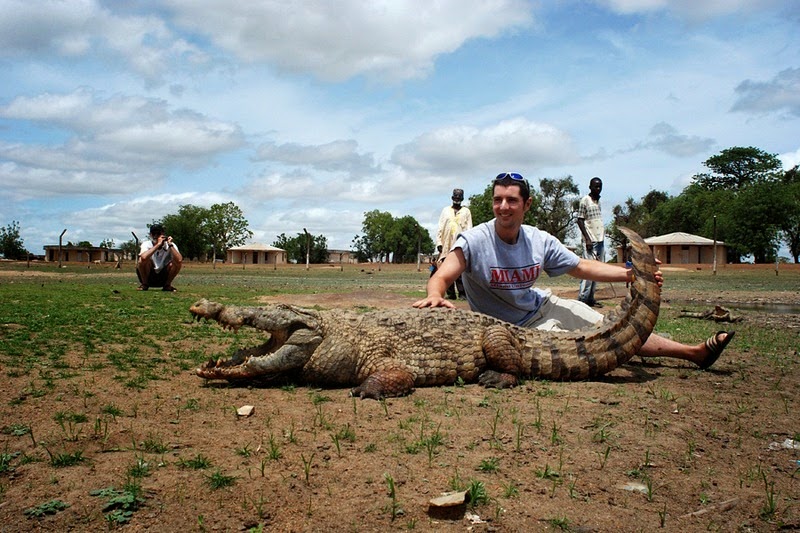 An alternate story tells us about an individual named Nave, who left his home in Leo in Burkina Faso, and came wandering into the country. He lost his way and while searching for water met a crocodile which led him to watering hole. It was then he decided that that spot was where he was going to settle and founded Paga. He therefore decreed that none of his descendants should ever eat a crocodile.

Nobody really knows how the crocodiles ended up in Paga. The pond is completely landlocked and some of the oldest beasts in the water are reportedly over 80 years old.

There are actually two crocodile ponds in Paga. The first one which is located on the highway 12 km from Navrango is called as the Chief Pond and the other is the Zenga Crocodile Pond, five minutes drive off the main road to the Paga border. Guides at the ponds use live chicken, paid by the tourists, to lure the crocodiles out of the water and into land where tourists can pet them or take pictures with them. Sometimes children and even adults would sit on the back of the crocodiles and have their pictures taken.

The Origins of Lollipops