The legendary origins of the submarine stretch back to 332 BC with a tale about Alexander the Great being lowered into the sea in a glass barrel to study fish. The submarine concept was thereafter consigned to the backwaters of history for some 1,800 years.

It reappears with the publication in 1578 of Inventions or Devises by William Bourne, an English gunner turned innkeeper and mathematician. In this work, Bourne describes the principle of making a boat sink and rise again by changing the volume of the ship. If you contract the volume of the ship, it will sink; if you expand its volume, it will float upward. The exact process for doing this is not made clear, and contemporary materials and techniques precluded effective experiment.

The Alexander legend and Bourne’s principle related more to the diving bell than a boat. The next step forward, conceptually, was to add some form of propulsion. The Dutchman Cornelius van Drebbel achieved this around 1620.

His boat, Drebbel I, is probably the first working submarine. Basically an enclosed rowboat manned by 12 oarsmen, it probably had a sloping foredeck. This would have forced the boat under as forward momentum was applied, like the angled plane of a modern submarine.

In 1636, a French priest, Marin Mersenne, added another piece to the jigsaw. He suggested that a submarine should be built of copper and be cylindrical in shape to better withstand increasing pressure at depth. Early designs for submarines, henceforth, generally adopted a porpoise-like form. Despite these early concepts and the Drebbel I prototype, it was more than 200 years before the French Navy launched the first true precursor of the modern submarine. In 1863, the Plongeur (‘Diver’), which was powered by engines run on compressed air, became the first submarine that did not rely on human propulsion for momentum.

Some 400 years before Christ, Alexander the Great explored the depths of the sea in a glass diving bell

Military possibilities of the Submarine

It was not long before the military possibilities of a submerged boat began to be realised. As early as the First Anglo-Dutch War (1652- 1654), Louis de Son had built his 72ft-long ‘Rotterdam Boat’. This, in effect, was a semi-submerged battering-ram designed to approach an enemy warship unnoticed and punch a hole in its side. Once launched, though, it was unable to move.

The American War of Independence provided further impetus in the form of David Bushnell’s Turtle. Water was pumped in and out of the skin of the boat to change its ballast, thus enabling the boat to sink and rise. This one-man boat was driven by hand-cranked propellers, one to provide vertical movement and another to provide horizontal drive. The Turtle became the first submarine to attack a ship, probably the HMS Eagle, in New York harbour in 1776. The attack failed, as Ezra Lee, the boat’s pilot, was unable to attach its armament, a 150lb-keg of gunpowder, to the enemy ship’s hull.

Another American, Robert Fulton, attracted the attention of Napoleon in 1800 with his Nautilus. This submarine had a number of successful test dives, reaching a depth of 25ft and an underwater speed of 4 knots. It was driven by a hand-cranked propeller underwater, and by a sail when on the surface. Although it made a number of attacks on Royal Navy ships, they could always see the Nautilus coming and easily evaded it.

Failure meant Fulton’s dismissal, and the Royal Navy, with the world’s largest fleet, breathed a sigh of relief. Submarine warfare did not develop further for 50 years. Then, the American Civil War (1861-1865) provided a major stimulus, particularly on the Confederate side. The Union had retained control of the US Navy, and its blockade of the South meant that the Confederacy was bound to search for ways to break it: the submarine was one of these.

Several prototypes were built – by both sides – but these depended primarily on improvements to established technology rather than anything radically new. The most significant achievement was the destruction of the USS Housatonic in 1864, the first submarine victory. The oar-propelled CSS Hunley attacked the Housatonic with an explosive device on the end of a spar that was attached to its nose. Though the Hunley did not survive the attack, war beneath the waves had definitely begun.

The Royal Navy and the modern submarine

The real breakthrough, and the birth of the modern submarine, came courtesy of John Phillip Holland, towards the end of the 19th century. He became the first designer to successfully unite three new pieces of technology – the electric motor, the electric battery, and the internal combustion engine – to create the first recognisably modern submarine.

The Admiralty’s official position at the time was to give submarine development ‘no encouragement’. But it could not afford to ignore it completely, and, in October 1900, five Hollands were ordered with the purpose of testing ‘the value of the submarine in the hands of our enemy’. The Hollands were built under licence at Vickers’ yards in Barrow, which was to become the home of British submarine construction.

The traditionalist view at the Admiralty thought of submarine warfare, in the words of Rear Admiral Wilson, as ‘underhand, unfair, and damned un-English’. Notwithstanding such views, the submarine gained a champion in Admiral ‘Jacky’ Fisher. Having watched the five Hollands ‘sink’ four warships in an exercise to defend Portsmouth Harbour, Fisher realised that naval warfare had changed. So, when he became First Sea Lord (1904-1910), he diverted 5% of the Navy’s shipbuilding budget, despite strong opposition, to the construction of submarines.

From the beginning of Fisher’s tenure to the outbreak of the First World War, there was continual development of the submarine, from the Hollands through A to D classes. The D-class, with its decking and deck gun, represented a major change from the porpoise shape of earlier submarines, and introduced the form that would become familiar through two world wars.

Lulled into the belief that ASDIC made submarines irrelevant, the British Government, advised by the Admiralty, agreed in 1935 that the German Navy should be allowed the same tonnage of submarines as the Royal Navy.

Captain, later Admiral, Dönitz was ready with his submarine strategy. WWI experience implied that in a ‘tonnage war’, merchant ships could be sunk faster than they could be replaced. In order to achieve this, U-boats were to operate in Atlantic waters in ‘wolf packs’: seven or eight boats would shadow merchantmen across the sea, attack at night, and then submerge to escape, ready for the next attack.

The strategy worked until mid-1943, when the Germans had lost 250 submarines and sunk over 3,000 Allied vessels. In May, the tide turned, with 42 U-boats sunk in that month alone, forcing Dönitz to withdraw his fleet from the Atlantic. Even so, over the next two years they lost a further 520 submarines and sank only 200 ships. American aid, the convoy system, long-range air cover, and improvements in detection and anti-submarine weapons all had their effect.

Having lost the Battle of the Atlantic, the Germans were forced to rethink. One result was the development of the snorkel, a breathing tube that meant the submarine could use its diesel engine whilst just below the surface, conserving battery power. It also made submarines less visible from the air, though the snorkel did leave a trailing wake, and it could be picked up on sonar. The standard U-boat had been the Type VII, of which more than 700 were built. They were around 200ft long, with a surface displacement of 760 tons, and a surface speed of 15 knots, equalling the speed of most surface ships. They had a dive time of 20 seconds to a maximum safe depth of 650ft, a range of over 8,700 miles, and could go seven or eight weeks without refuelling. Britain’s equivalent workhorse was the T-class.

They were the first of the Navy’s boats to have their fuel tanks inside the hull, eradicating the problem of leaking fuel leaving surface trails. Whilst slightly smaller than the classes they replaced, they were an all-round improvement, and an all-welded hull meant they were stronger and able to dive deeper.

The T-class performed sterling service in all naval theatres of war. HMS Truant, for example, sank enemy ships in home waters, in the Mediterranean, and in the Far East – clocking up 81,000 tonnes of destruction in all. There was also success in the Far East for HMS Trenchant, which sank the Japanese heavy cruiser Ashigara.

Submarines during The Cold War

Post WWII developments were dominated by the Cold War and the arms race between the US and the USSR. Changed political realities meant a different role for the submarine. The Royal Navy’s job ceased to be aimed at attacking surface shipping, and focused instead on the interception of Soviet submarines.

The new Amphion class had been designed and introduced towards the end of WWII, but the submarine’s new role, and the development of increasingly sophisticated equipment, meant they were gradually refitted. They had already been given the Snort mast, a development of the German snorkel, and air-warning radar that worked whilst the submarine was underwater. Extra streamlining was introduced, which included the removal of the deck-gun; but perhaps the most important advances were in the complex array of sonar devices that were added to the boat.

The Americans had also been busy, and another German invention, the rocket, became one of the major areas of advance in submarine design. The US’s experimentation with sub-launched missiles would lead to Polaris and Trident.

They also went nuclear in the sense of having developed a suitable power-plant for a submarine. In 1955, USS Nautilus made the first nuclear-powered submarine patrol, all 323ft and 3,674 tons of it. It had a surface speed of 18 knots and a capability of reaching 23 knots submerged. The Nautilus also represented a radical shift in design. Capable of sustained underwater cruising, the Nautilus had returned to the streamlined, porpoise shape of the early pioneers, for there was now no need to spend long periods on the surface. It revolutionised naval warfare, for it combined the stealth and surprise of traditional submarines with a speed greater than their quarry. 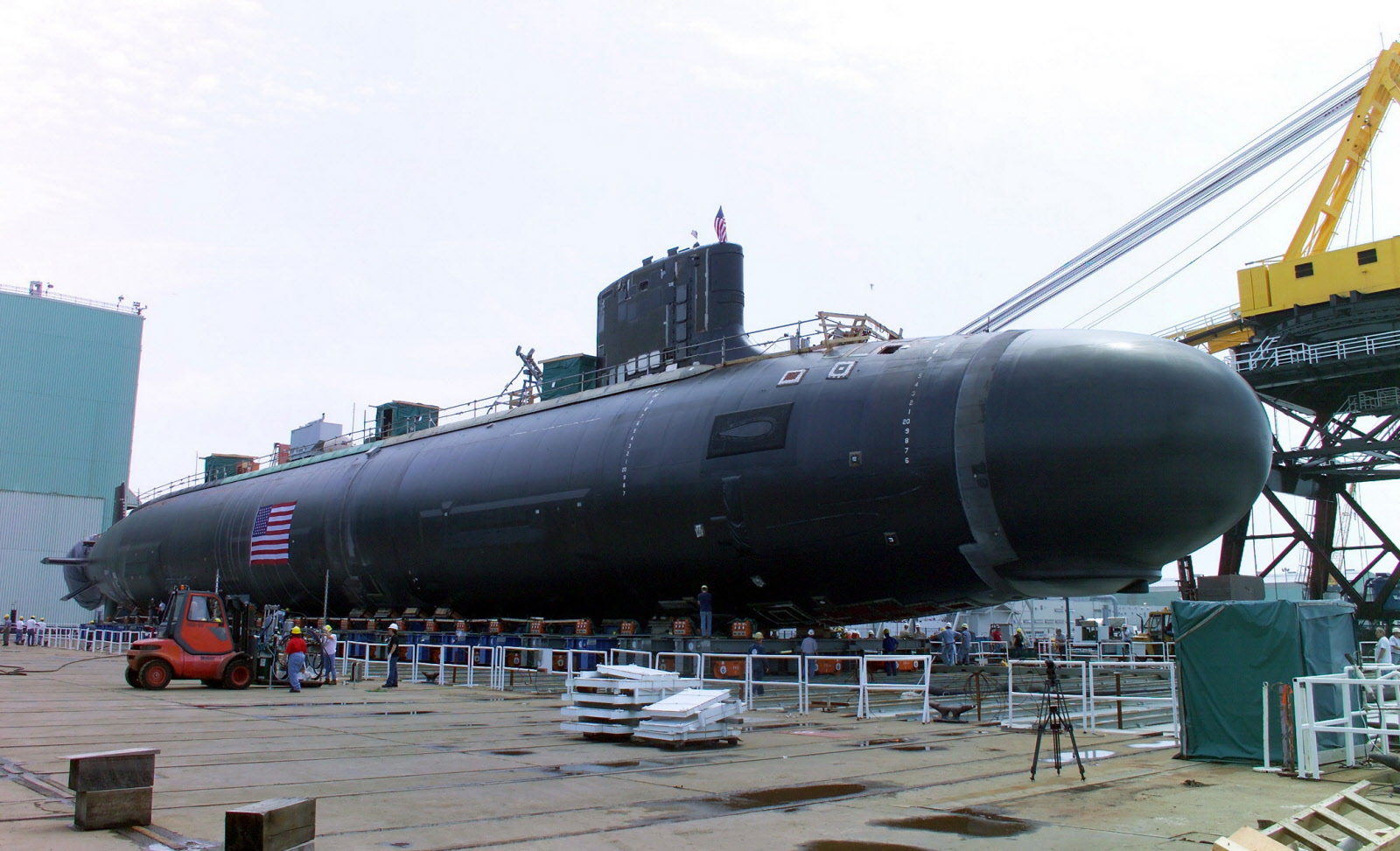 The U.S. Navy’s newest and most advanced nuclear-powered attack submarine and the lead ship of its class, PCU Virginia (SSN 774) is moved outdoors for the first time at the General Dynamics Electric Boat shipyard.

The British, too, developed nuclear-powered submarines, and Dreadnought, the Navy’s first example, went to sea in 1963. There were two strands to British design: one was the attack submarine, with responsibility for protecting Britain’s nuclear deterrent; the other was the Submerged Ship Ballistic Nuclear (SSBN), which carried Britain’s nuclear deterrent. The most famous of the latter was the Resolution Class HMS Conqueror, which sank the Belgrano during the Falklands War in 1982, and remains the only nuclear submarine with an official kill.

Such combined operations point the way to contemporary military strategy. As the Malta Convention of 1998 declared the Cold War over, so the role of the submarine has changed. It is no longer just anti-submarine work, but, in military terminology, ‘Maritime Contributions to Joint Operations’. This also includes the ability to launch special forces operations and undertake intelligence gathering – but the Silent Service has always been capable of multi-tasking. Silent, submerged, and lethal, the submarine has changed the face of naval warfare.