Home Art+Culture Spring arrives. What really is an equinox?

It’s almost time to hang up those winter coats. The season of flower blossoms, pastel colors, playoff basketball and Easter egg hunting is upon us.

This year, the first day of spring — also known as the spring equinox — falls on March 20. Here’s what you need to know about the occasion.

The spring equinox marks one of the two times a year when day and night are nearly the same length. The term equinox comes from the Latin word equinoxium, which means “equality between day and night.”
This phenomenon occurs when the center of the sun is directly above Earth’s equator.
The spring equinox signals that the Northern Hemisphere of the planet has begun slowly tilting toward the sun, leading to longer days and more sunlight, according to NASA.

When is it, exactly?

The precise time of the astronomical start of spring is Wednesday at 5:58 p.m. ET. If you’re in a different time zone, you can check what time it starts on the US Naval Observatory’s website.

Is anything special happening?

The night sky will shine a little brighter than usual.
There will be a full moon on Wednesday at 9:43 p.m. ET, just a few hours after the official start of spring. It’s the first time since 1981 that the spring equinox and a full moon coincide on the same day.
This full moon is also extra special because it will be a supermoon. That means the moon will appear larger than normal because of its close proximity to Earth.

Is the spring equinox always on the same day?

No, but it doesn’t vary by much. The spring equinox always occurs in the Northern Hemisphere on March 19, 20 or 21.
The date of the equinox changes from year to year to account for the fact that the Earth doesn’t take exactly 365 days to make a complete revolution around the sun. The Gregorian calendar adds a leap day every four years to account for this, and the spring equinox date varies for the same reason.

How do people celebrate it?

People across the globe mark the occasion in various ways. 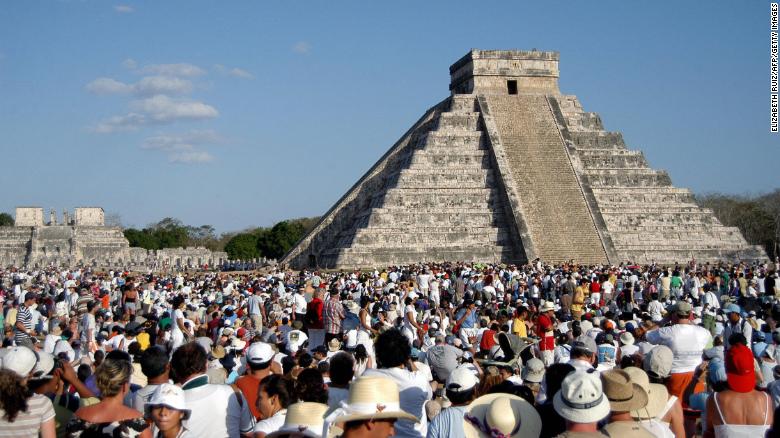 Thousands surround the Kukulkan pyramid at the Chichen Itza archaeological site during the celebration of the spring equinox.
In Chichen Itza, Mexico, thousands gather at the Kulkulkan pyramid. In the late afternoon, the sun creates a shadow that looks like a snake sliding down the northern staircase.
And in Stonehenge, England, pagans, druids and tourists watch the picturesque sunrise at the prehistoric monument.
Holi, a major festival in India that marks the start of spring, also begins on March 20 this year. During Holi, people come together for song, dance and to splash their loved ones with colored powder and water.

Under the skin: how insertable microchips could unlock the future

The Winner Of Miss Universe 2019 Represents More Than Just A...