Galan, a freshman business undecided major and communications minor, carries a contagious personality that is perfect for hosting a radio show, during which she sings covers of popular songs.

She sings a variety of songs on her show, but her favorites are songs by Adele and Miley Cyrus. Galan isn’t shy about sharing her voice or talents with the Quinnipiac community. She is involved with Q30 Television and helps film for their entertainment segments.

“I want to have my own [TV] show one day,” Galan said with a smile before her radio show began. “I was doing all the background stuff [at Q30], and I’m saying, ‘These cameras are huge! I don’t know what I’m doing.’ So they put me on camera instead.”

Galan considers herself a natural on stage but plans to learn management skills at Quinnipiac to develop a background in business, where she’ll be educated for her future.

“I was originally going to study pharmaceutical marketing,” Galan said. “Then I realized I don’t love biology, and I don’t think I’m meant to be doing that. I didn’t feel like me there.”

Galan’s background in the arts stretches farther back than her involvement at Quinnipiac. Since middle school, Galan has been involved in the arts. She was in her school chorus throughout middle and high school. She was a member of the N.Y.S. Music Association and in several school and local musical theatre productions.

It’s only natural for her to continue living out her dreams in TV and music here at Quinnipiac.

“I have always had an old soul. I never really fit in or followed the rest of the crowd,” Galan said. “Being myself, I always felt at home and having all the support from my family made it even better.”

Her family is built on positivity and brings encouraging support in whatever Galan does. Galan went on and on about how amazing her family and mom are and how they’ve led her to where she is today, but she wasn’t always surrounded by so much love and support.

Born in Siberia, Russia, Galan was adopted when she was 3 years old. She lived in an orphanage for a year before Marcia Galan adopted her in November 2001. 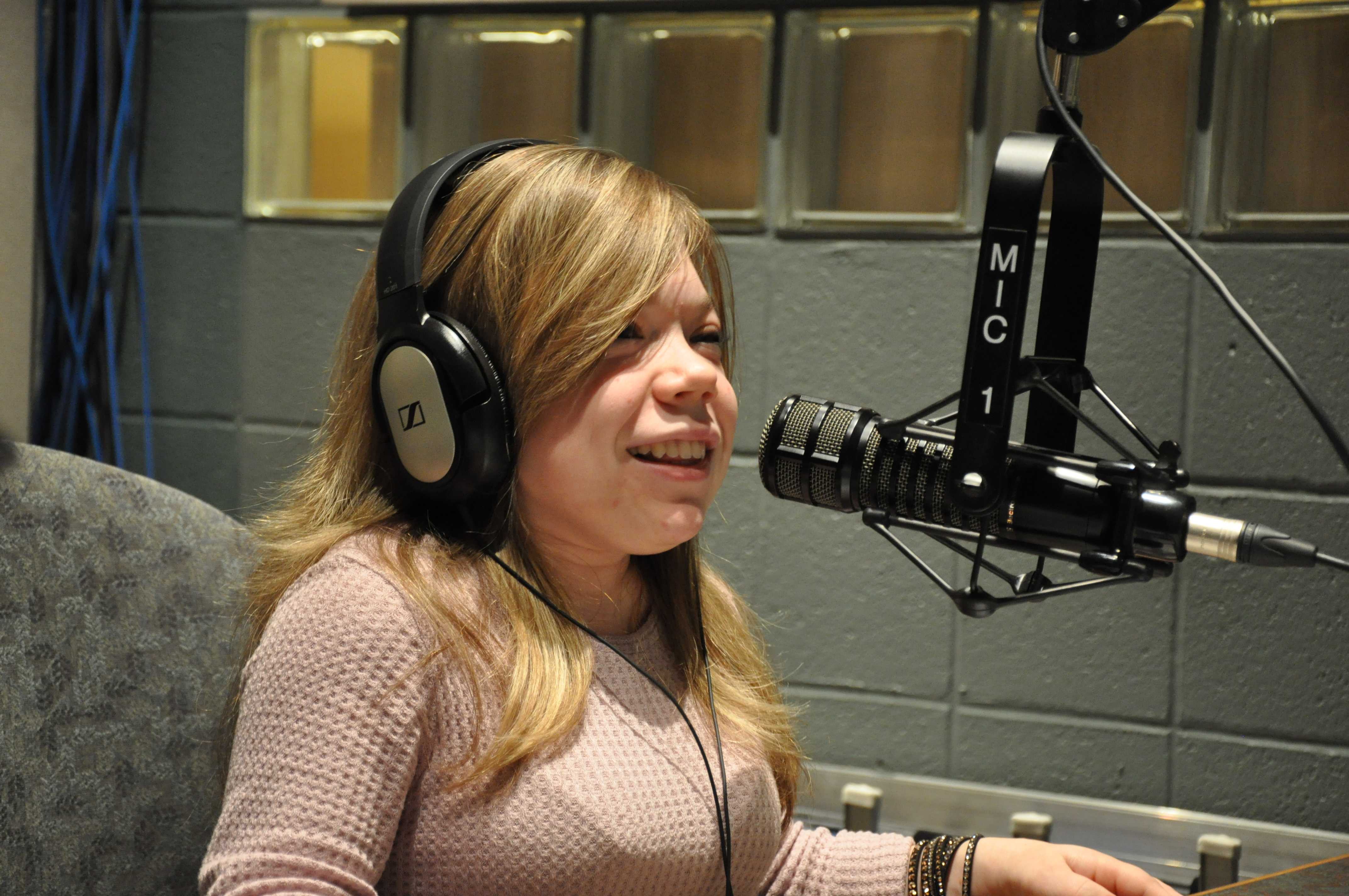 “My [adoptive] mother looks exactly like me. It’s the weirdest thing! It’s like destiny, that’s what [my mom and I] always say,” Alena said as she pulled out a picture of her and her mom to prove her point.

After the adoption, Alena focused on her life here in the United States and never looked back. She values the strong connection she has with her adoptive mom.

“Right since she picked me up, I called her mama. I thought she was my mother coming back to get me,” Alena said.

Soon after Alena’s arrival to the United States, she was diagnosed with mucopolysaccharidosis at the Children’s Hospital at Montefiore Medical Center in New York and needed a rare enzyme replacement.

Further testing determined it was Maroteaux- Lamy syndrome, MPS VI, which is a rare genetic disorder characterized by complete or partial lack of activity of the enzyme, according to WebMD.

“They told us that I wouldn’t live for much longer without [the enzyme],” Alena said.

Because of her diagnosis with a rare genetic disease, Alena’s mom Marcia was told to prepare for the worst.

“Alena was handed a death sentence. She would most probably die in her early twenties, I was told,” Marcia said in an email interview.

Three years later in 2005, the enzyme became available and the FDA approved the life-saving enzyme replacement therapy. Alena was the first patient in North America to receive it.

“It was a miracle,” Alena said. She received her first enzyme replacement at 7 years old.

She received weekly infusions after that first replacement. She and her mom would celebrate the gift of life after each one, and Galan would receive flowers and balloons from family and friends showing their support.

She shared her story with hospitals and medical schools, explaining how she thought she would pass away in her early twenties.

“All I wanted was to give back for what I have and the amazing life that I was given,” Alena said.

She was the poster child for Children’s Miracle Network and represented Make-a-Wish Foundation, continuing to share her story and give hope to children in similar situations.

“I feel like the guardian angels are watching over me. For my mom to go around the whole country and to find me is destiny,” Alena said.

Continuing to share her story, at 8 years old, she got the opportunity to sing at Radio City Music Hall for “Garden of Dreams” event through one of the non-profit agencies she was a part of for children with life-threatening diseases.

“Alena made her singing debut singing ‘This Is Me’ by Miley Cyrus on the stage of Radio City Music Hall. That was when I knew she found her home,” Marcia said.

The stage became both her passion and her love.

“Alena sang all the time. It was one of her favorite things to do. It was her joy,” Marcia said. “She was always a performer, especially wanting to bring her joy to everyone else.”

She started taking voice lessons after and took her first formal singing lessons at Mike Risko Music School, in her hometown.

From there she went to the Music Institute in Massachusetts and got the chance to write her own music. She also started recording.

Everything she does connects to her desire to put positivity in the world. She wants her music to connect to people and make a difference.

“You can Google me! I’ve been all over the place and I love seeing people’s reactions to me performing and making them smile,” Alena said.

She continued to audition for the opporutnity to perform, landing a role in “My Carnegie Moment” for Paramount Pictures. She sang at Carnegie Hall and was in the trailer for the film, which aired during “America’s Got Talent.”

“I wore a black lace dress, it was pretty,” Alena said. “I wanted to be simple, yet elegant. I have no stage fright, and I don’t know what it is, it’s like my home.”

Her first experience with giving back creatively was with her Girl Scouts Gold Award project. She also wrote a book about bullying called “Differences Are Blessings.”

Her number one fan and role model, her mom, is always at her side.

“She helped me to grow stronger. She’s my guardian angel, without her I wouldn’t be alive,” Alena said.

As Alena’s mother, Marcia believes it is her job to support her and do whatever she can to make her dreams come true.

“When you realize that your child has a talent and a passion, you do everything you can to help them develop it,” Marcia said.

Alena would drag her mom to all her auditions and remembers auditioning for “The X Factor” and making it to the producer round at the age of 13. This was a memorable experience for the both of them. It not only showed Alena’s true talent but also the bond that her and her mom share.

Alena remembers being one of the only ones auditioning with her mom instead of a talent coach, but she wouldn’t have wished to share that moment with anyone else.

“Alena can show people that big things do come in small packages, and that no matter how different we appear, we all are beautiful inside and out,” Marcia said.

Written by By Amanda Perelli /The Quinnipiac Chronicle

Here’s What Steroids Actually Do to Your Body