Home TKN News Careers What’s it like to live on the International Space Station?

When it comes to business travel, astronauts take the cake. The six space scientists and engineers who live and work in the International Space Station are traveling at a speed of five miles per second — orbiting Earth once every 92 minutes.

As far as we know, they don’t earn frequent flyer miles, but they do get to spend an average of six months living and working with a multinational crew in what’s arguably the coolest office in the solar system.
So what exactly is the International Space Station? And what’s it like to live and work 250 miles above the Earth?

A laboratory in the sky

The International Space Station is an orbiting space laboratory, assembled through a decades-long collaboration of countries.
The 360-ton space station is larger than a five-bedroom house — just much longer and narrower. It has enough room for six sleeping quarters, a gym, a 360-degree viewing window, and areas to conduct a wide array of science experiments.
“We’ve had continuous human presence on the space station for 19 years now,” said NASA spokeswoman Stephanie Schierholz. “It is an unprecedented international collaboration among nations.”
Construction of the International Space Station began in November 1998, through a partnership between Canada, Europe, Japan, Russia and the United States. Pieces of the station were sent to space on 42 assembly flights, 37 US space shuttles and five Russian rockets. The last major instrument sent to the space station — an Alpha Magnetic Spectrometer that’s mounted on the side to facilitate particle physics experiments — was sent on a shuttle in May 2011.
This orbiting science lab is powered by an acre of solar panels, which make it one of the brightest objects in the sky. You can actually see the International Space Station with the naked eye — it looks like a very fast-moving plane high in the sky. The station’s orbital path takes it over 90% of the world’s population, and NASA even publishes a schedule for when it’s visible from your city.

Challenges of living in space

Working in outer space for six months has its challenges. Microgravity means that crew members have many obstacles to their regular routines, such as eating, sleeping and hanging out.
The space station has no refrigeration, meaning all food has to be stored carefully and is often vacuum-packed. Some foods come in special forms, such as spaghetti which requires added water or rehydratable scrambled eggs. Even salt and pepper come in liquid form because without gravity the sprinkles would fly away. 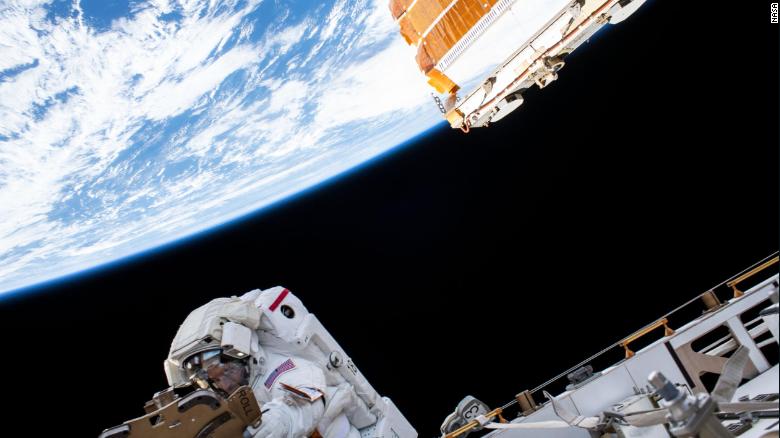 At dinner time, crew members have to strap meal trays to their laps or to the wall. And while preparing meals, astronauts tape ingredients to the table so they don’t float away.
“There’s a lot of things you’ve got to think about and manage while you’re eating up here,” said former space station Commander Shane Kimbrough in a NASA video.
Morning routines also get shaken up by zero-gravity. In the absence of regular showers and sinks, astronauts and cosmonauts use rinseless soap and shampoo and spit their toothpaste into washcloths. The crew also has to use special toilets that have leg restraints and a vacuum for waste.

Although zero gravity looks fun, spacewalks are no walk in the park.
Crew members have to exercise for more than two hours a day to counteract the loss of muscle and bone mass caused by living in microgravity. Because astronauts do not have to use their lower body muscles to walk or stand in space, their lower backs and leg muscles begin to lose strength unless they exercise regularly.
In a video for NASA, astronaut Reid Wiseman explained that the treadmill is connected to the wall and crew members attach themselves to it with bungee cords.
“So when you’re on it you’re running straight down towards Earth,” said Wiseman, who was part of Expeditions 40 and 41, which is what the space station calls their missions. “Very weird feeling.”
In true scientific form, astronauts’ bone and muscle loss is actually used as a research tool. NASA’s Schierholz told CNN that studying the astronauts’ physical conditions in space contributes to medical research for osteoporosis.
Space flight also decreases humans’ immune systems and cardiovascular health. On Earth, humans’ hearts do a lot of work to counteract gravity and move blood to the entire body.
But in space, blood and water move to the upper body. This makes astronaut’s faces often appear puffy.
Astronauts may have a difficult time getting shuteye as well. Crew members experience 16 sunrises and sunsets each day, and they have to strap themselves down inside their sleeping bags to counteract weightlessness. According to NASA, astronauts are scheduled to get eight hours a day but some report difficulties sleeping due to excitement or motion sickness.
Living in space can even change astronauts’ physical characteristics. Astronaut Scott Kelly grew 1.5 inches after spending nearly a year in space, and experienced changes in his genetic expression, likely due to radiation exposure damaging his DNA.
“The astronauts themselves are an investigation,” said Schierholz, explaining that space station research helps scientists understand radiation exposure and develop new materials that could one day help astronauts safely explore the moon and even Mars.

What’s next for the International Space Station

The most recent crew — part of Expedition 61 — includes astronauts and cosmonauts from the US, Russia and Italy. They will be working on the station from October 2019 until February 2020.
According to NASA, the Expedition 61 crew is conducting research focused on dark matter, protecting vital organs from radiation, using rovers for future exploration on the Moon and Mars. Altogether, the crew will conduct 250 science investigations in a range of fields including biology, Earth science and technology development.
Expedition 61 will also involve the first all-female spacewalk this week, conducted by American astronauts Christina Koch and Jessica Meir. Koch, who arrived at the International Space Station in March 2019, will also set the record for the longest spaceflight by a woman, surpassing the previous record of 288 consecutive days in space held by Peggy Whitson.
But the achievements of the International Space Station are much bigger than one person or one country. Humans have been working in space every day since the arrival of the first crew, and the collaborative space station continues to allow governments, universities and companies across the world to stay on the cutting edge of science and engineering.
All in all, NASA estimates that more than 2,500 experiments have been conducted on the International Space Station since its creation.
“Whatever your scientific interest is, we’re probably doing some related research on the space station,” Schierholz said.
Written by By Lauren Kent, CNN

The Sweet Story of the Berlin Candy Bomber

What It’s Like to Become a NASA Astronaut: 10 Surprising Facts

Many Teen Girls Use Steroids

Architect for 9/11 memorial tells the story of its creation

Do you have what it takes to be a stand-up comedian?

How a Mexican resort invented eco-tourism