Home TKN News Careers To Launch a Nuclear Strike, President Trump Would Take These Steps
How much power does the president alone have to launch a nuclear strike? Bloomberg News asked Bruce G. Blair, a former Minuteman missile-launch officer and research scholar at Princeton University’s Program on Science and Global Security, to spell out the step-by-step procedure.

The president considers a nuclear strike

The commander-in-chief’s power is clear: He or she has sole authority to use nuclear weapons.

The top brass is brought in

Before initiating military action, the president convenes a conference with military and civilian advisers in Washington and around the world to talk through options. In the White House, the call takes place in the Situation Room. If traveling, the president is patched in on a secure line. A key participant in the meeting: the Pentagon’s deputy director of operations, an officer in charge of the National Military Command Center, also known as the “war room.” This around-the-clock operations center is responsible for preparing and ultimately transmitting a launch order from the president. The head of all U.S. strategic nuclear forces at Strategic Command in Omaha would probably also be asked for a briefing on strike options. 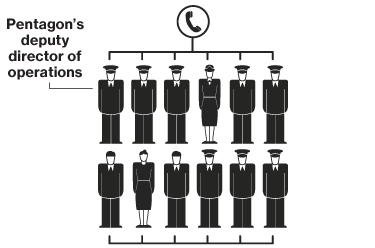 [Time elapsed: less than one minute]

The consultation lasts as long as the president wishes, but if enemy missiles are heading toward the U.S. and the president must order a counterstrike, the consultation may last just 30 seconds. The tight time line raises the risk of launching hastily on a false warning.

The president decides to launch

Some advisers may try to change the president’s mind or resign in protest—but ultimately, the Pentagon must comply with the commander-in-chief’s order. 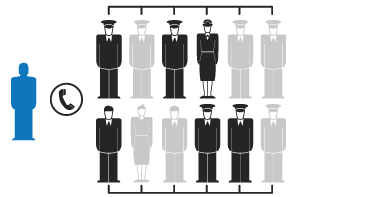 The order is verified

The senior officer in the Pentagon war room must formally authenticate that the person ordering the strike is indeed the president. The officer reads a “challenge code,” often two phonetic letters from the military alphabet, such as “Delta-Echo.” The president retrieves the “biscuit,” a laminated card the president or military aide carries at all times, and finds the matching response to the challenge code: “Charlie-Zulu,” for instance. 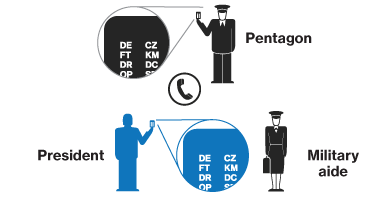 The order goes out

The war room prepares the launch order, a message that contains the chosen war plan, time to launch, authentication codes and codes needed to unlock the missiles before firing them. The encoded and encrypted message is only about 150 characters long, about the length of a tweet. It is broadcast to each worldwide command and directly to launch crews. 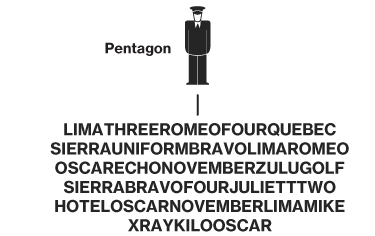 The submarine and ICBM crews receive the message within seconds of the broadcast. Just a few minutes have passed since the initial conference call.

Launch message in hand, the crews open locked safes to obtain sealed-authentication system (SAS) codes prepared by the National Security Agency and distributed throughout the military’s nuclear chain of command. They compare the SAS codes in the launch order with those in their safes.

If the missiles are launched from a submarine:

The captain, executive officer and two others authenticate the order. The launch message provides the combination to an on-board safe holding the “fire-control” key needed to deploy the missiles. Missiles are ready for launch about 15 minutes after receiving the order. 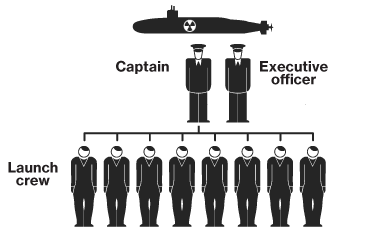 If the missiles are launched from land:

Five launch crews in various underground centers control a squadron of 50 missiles. Each crew consists of two officers. The individual teams are spread miles apart. Each receives the orders, opens safes and compares their SAS codes to those sent by the war room. If they match, the crews enter the message’s war plan number into their launch computers to re-target missiles from their peacetime targets in the ocean to their new targets. Using additional codes in the message, the crews enter a few more keystrokes to unlock the missiles before turning launch keys retrieved from their safe. At the designated launch time, the five crews turn their keys simultaneously, sending five “votes” to the missiles. 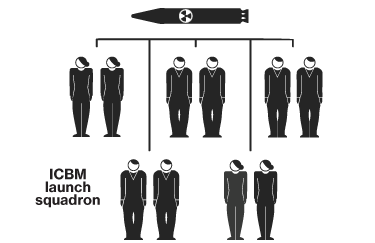 It takes just two “votes” to launch the missiles. So even if three two-officer ICBM crews refuse to carry out the order, it won’t stop the launch. 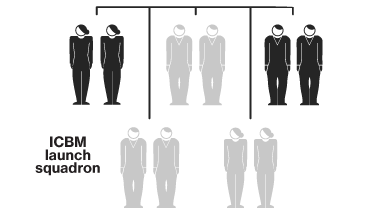 About five minutes may elapse from the president’s decision until intercontinental ballistic missiles blast out of their silos, and about fifteen minutes until submarine missiles shoot out of their tubes. Once fired, the missiles and their warheads cannot be called back.

The Story Of John Mccain The War Hero

The Origin and Evolution of Chinese Dance

Everything You Should Know About National Walkout Day on April 20

9 things you didn’t know about the once-majestic Astrodome