After years of discussion and over half a century of waiting, the United States has finally honored the Americans who helped fight World War II with a memorial. The World War II Memorial, which opened to the public on April 29, 2004, is located at what was once the Rainbow Pool, centered between the Lincoln Memorial and the Washington Monument.

The idea of a WWII Memorial in Washington DC was first brought to Congress in 1987 by ​Representative Marcy Kaptur (D-Ohio) at the suggestion of World War II veteran Roger Dubin. After several years of discussion and additional legislation, President Bill Clinton signed Public Law 103-32 on May 25, 1993, authorizing the American Battle Monuments Commission (ABMC) to establish a WWII Memorial.

In 1995, seven sites were discussed for the Memorial. Though the Constitution Gardens site was initially selected, it was later decided that it was not a prominent enough location for a memorial commemorating such an important event in history. After more research and discussion, the Rainbow Pool site was agreed upon.

In 1996, a two-stage design competition was opened. Out of 400 preliminary designs entered, six were chosen to compete in the second stage which required review by a design jury. After careful review, the design by architect Friedrich St. Florian was chosen.

St. Florian’s design consisted of the Rainbow Pool (lowered and reduced in size by 15 percent) in a sunken plaza, surrounded in a circular pattern with 56 pillars (each 17-feet-high) which represent the unity of the U.S. states and territories during the war. Visitors would enter the sunken plaza on ramps which will pass by two giant arches (each 41-feet tall) that represent the two fronts of the war. 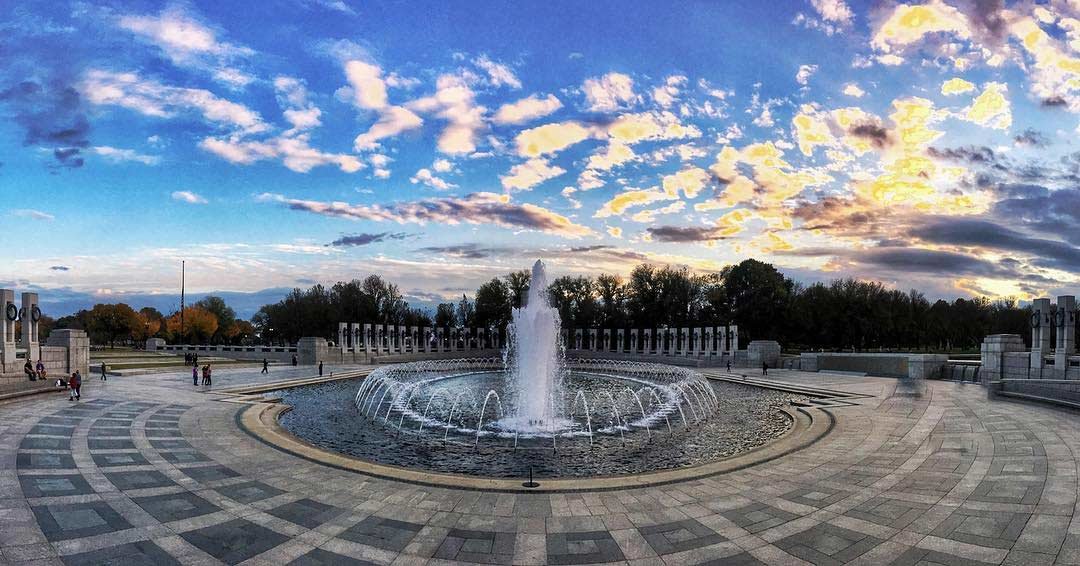 Inside, there would be a Freedom Wall covered with 4,000 gold stars, each representing 100 Americans that died during World War II. A sculpture by Ray Kasky would be placed in the middle of the Rainbow Pool and two fountains would send water more than 30-feet into the air.

The 7.4 acre WWII Memorial was estimated to cost a total of $175 million to build, which includes future estimated maintenance fees. World War II veteran and Senator Bob Dole and Fed-Ex founder Frederick W. Smith were the national co-chairmen of the fund-raising campaign. Amazingly, approximately $195 million was collected, almost all from private contributions.

Unfortunately, there has been some criticism over the Memorial. Though the critics were in favor of a WWII Memorial, they strongly opposed its location. The critics formed the National Coalition to Save Our Mall in order to stop the construction of the Memorial at the Rainbow Pool. They argued that placing the Memorial at that location destroys the historic view between the Lincoln Memorial and the Washington Monument.

On November 11, 2000, Veterans Day, there was a ground-breaking ceremony held on the National Mall. Senator Bob Dole, actor Tom Hanks, President Bill Clinton, a 101-year-old mother of a fallen soldier, and 7,000 others attended the ceremony. War-era songs were played by the U.S. Army Band, clips of war-time footage were shown on large screens, and a computerized 3-D walkthrough of the Memorial was available.

The World War II Memorial honors the 16 million men and women who served in the U.S. armed services, the 400,000 who died in the war, and the millions of Americans who supported the war on the home front.

Hadrian’s Wall: Who built it and why was it so important?