Home TKN News Careers The Science Barge: Floating Greenhouses may be the future of our food

Students from Saunders High School in Yonkers, New York, are visiting a farm. But they aren’t standing on the edge of a cornfield. Instead, the students are on a 41-meter (135-foot)-long flat-bottom boat called the Science Barge. It’s anchored in the Hudson River and is just a few miles north of New York City.

The Science Barge is an environ- mental education center and model urban farm. In addition to the green- house, there are also solar panels, wind turbines, a water storage tank, a miniature wetland, and a shipping container that stores the batteries and brains of the operation (see dia- gram, above). Each growing season, all of these high-tech systems work together to produce about 907 kilo- grams (2,000 pounds) of fruits and vegetables in an area about the size of a one-bedroom apartment.

Visiting students see how it’s possible to use a small amount of resources to produce a lot of food in a compact urban area. Currently, the United Nations estimates that 6.8 billion people inhabit Earth, and they expect that number to surpass 9 billion by the year 2050. Since the bulk of this population increase will occur in cities, urban farming will be vital for survival. “This is a farm that allows students to re-imagine the way that they think of a farm,” says Rick Magder, executive director of Groundwork Hudson Valley, the non- profit environmental-education group that operates the Science Barge.

In the greenhouse, there are 80 vines stretching from floor to ceil- ing with ripe melons and tomatoes waiting to be picked. How do they cram that many plants into such a small space? The crops on the Science Barge are grown hydroponically. This system uses water and special porous rocks and other spongelike materials instead of soil. Each plant rises from a rock-filled bucket that is hooked up to a system of pipes that bring water and nutrients to the plant.

Since there’s no soil, the plants have no need to stretch their roots out to gather water and nutrients. This allows them to grow closer together. Provided with a steady supply of nutrients, the tomato and melon plants are able to use carbon dioxide and sunlight pouring into the green- house for photosynthesis, or the pro- cess by which plants produce their own food. The plants convert the water, nutrients, sunlight, and carbon dioxide into oxygen and glucose, a sugar that provides plants with the energy to run their life processes. As the plants grow, the Science Barge’s volunteer gardeners tend to them by regularly cleaning the buckets, moni- toring the nutrients, trimming excess leaves, and harvesting the fruit. Such attentive care allows the vines to reach more than 6 m (20 ft) in length.

The hydroponics system also recy- cles the water it uses, so that it takes only 7.6 liters (2 gallons) of water to grow a tomato on the Science Barge. A tomato grown using standard farm- ing methods consumes four times that amount of water. Not only does hydroponics take up less space and use fewer resources than conventional farm-ing methods, it also allows the plants to grow much faster. 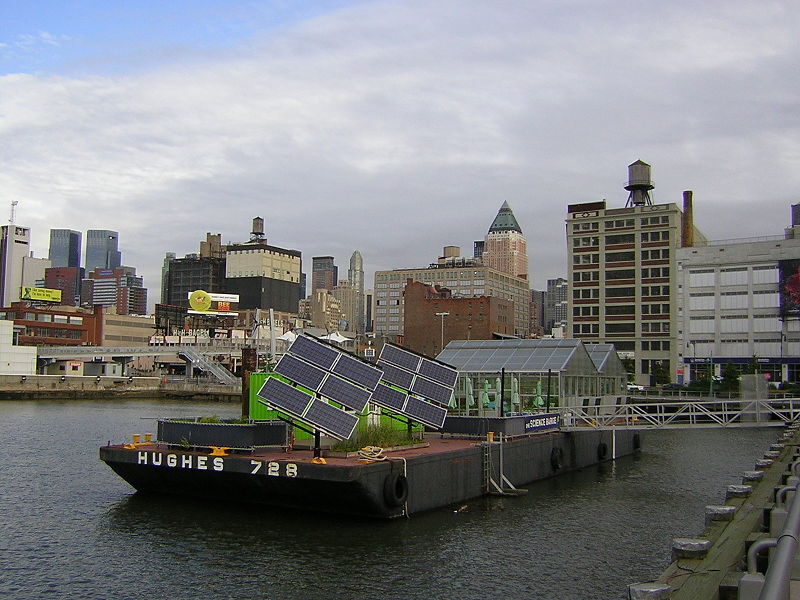 With a steady food supply, each plant can put its energy into growing leaves and fruits rather than gathering water and nutrients. On the Science Barge, a let- tuce plant goes from seed to harvest in only six weeks—compared with nine weeks for a plant grown in soil. “You make more food in a shorter amount of time because you’re giving the plant everything it needs,” says Devon Spencer, the educational director of the Science Barge.

While hydroponics is faster and more compact than conventional farming, a hydroponic farm still needs energy to power the comput- ers, pumps, and filters that are at the core of the hydroponics system. This is where the barge’s solar panels and wind turbines come in. About 80 per- cent of the energy that the Science Barge needs to operate comes from the sun. Another 12 percent is provided by the wind, and the rest is produced by old french- fry grease, which fuels the barge’s backup biodiesel engine.

Why build a farm in the city? With all those skyscrapers, apartment buildings, and people, New York City and its suburbs—including the Sci- ence Barge’s home of Yonkers—don’t have much room for conventional farms. Most of the food has to be shipped in from faraway places. “If New York  City were shut off from the world, it would run out of food quickly,” says Curt Collier, deputy director of the group that runs the Science Barge.

The Science Barge was built to show that there are solutions to this problem. Lessons from this floating farm could help New Yorkers and other urban residents produce their own food. One place where urban farms could thrive is on rooftops.

Using the Science Barge’s methods on New York City’s rooftops could poten- tially produce more than enough fruits and vegetables to feed all of the city’s 8.3 million residents. Rooftop gardens also have other advantages, such as keeping buildings cool and capturing rainwater that would otherwise end up in sewers.

“Bringing food production to the city solves a lot of problems,” says Collier. “The Science Barge is one way to show youths how to solve future food-production problems.”