The exact date and origin of the hula hoop is unknown, but a tradition of playing and exercising with hoops dates back to both Ancient Greece and Egypt. In ancient times, hoops were constructed from dried grapevines or other stiff grasses/plants, such as willow or rattan. Egyptian children played with hoops by rolling them with a stick or whirling them around their waists similar to modern hula hooping. Hoops seem to have been used as well by the Ancient Greeks. There is a vase in the Louvre from 500 BC depicting Ganymede rolling a hoop, and it is possible a version of hula hooping or hoop races were even a part of the Ancient Olympic Games.

Hoops were popular in Great Britain in the 14th century as a form of recreation and religious ceremonies. Medical records from the era record doctors treating dislocated backs and heart attacks that were attributed to hooping.

The term “hula hoop” came from British sailors who had seen hula dancing in the Hawaiian Islands and thought it looked similar to the movements of hooping back home. Hooping was again popular in England in the 1800 where children would roll hoops with a stick or spin the hoop around their waist.

Hoop dancing is a form of storytelling for Native American Indians dating back to the 1400s. With no beginning or end, it symbolizes the never-ending circle of life. Dancers used dozens of small hoops, typically made of reeds, as symbolic representations of animals such as eagles, snakes, butterflies or coyotes. Their hoop dance uses very rapid movements and the off-body use of hoops to construct symbolic forms around their bodies. Tony White Cloud ushered in modern Native American hoop dancing in the 1930s when he began using multiple hoops to perform stylized dances to weave stories of how life is connected with changes and transitions.
There is an annual Native American Hoop Dance competition at the Heard Museum in Phoenix, Arizona.

The hula hoop craze of the late 50’s can be traced to Australia, where children twirled hoops made out of bamboo. When the production of bamboo hoops could not meet the demand, Toltoys was engaged to make hoops out of plastic and sold 400,000 hoops in 1957.

Hula Hoops from the 50’s were small colorful plastic tubes made primarily for children to play and exercise. Today, hula hooping has come full circle. Children still love them and adults have begun using stronger, larger, heavier hoops for fitness and fun.

Popularized in the U.S.

Legend has it that Wham-O founders first heard about twirling hoops from a visiting Aussie. They began manufacturing polyethylene hoops in 1958. Wham-O passed out free hoops and gave demonstrations across southern California playgrounds and the hula hooping frenzy was born.

This craze lasted from January to October, then died out suddenly. It is estimated that over 100 million hoops were sold in its first year. The original price per hoop was $1.98.

By the mid 60’s, hula hoop sales were lagging so Wham-O added several ball bearings inside the tube to make noise. This helped launch a second hooping craze, including a National Hula Hoop Contest that ran from 1968-1981. The 1980 World Hula Hoop Championship was held in more than 2,000 cities with an estimated two million participants. Judging was done on compulsory moves, including the Knee Knocker, Stork, Hula Hop, Wrap the Mummy, Alley Oop, as well as freestyle dance routines. 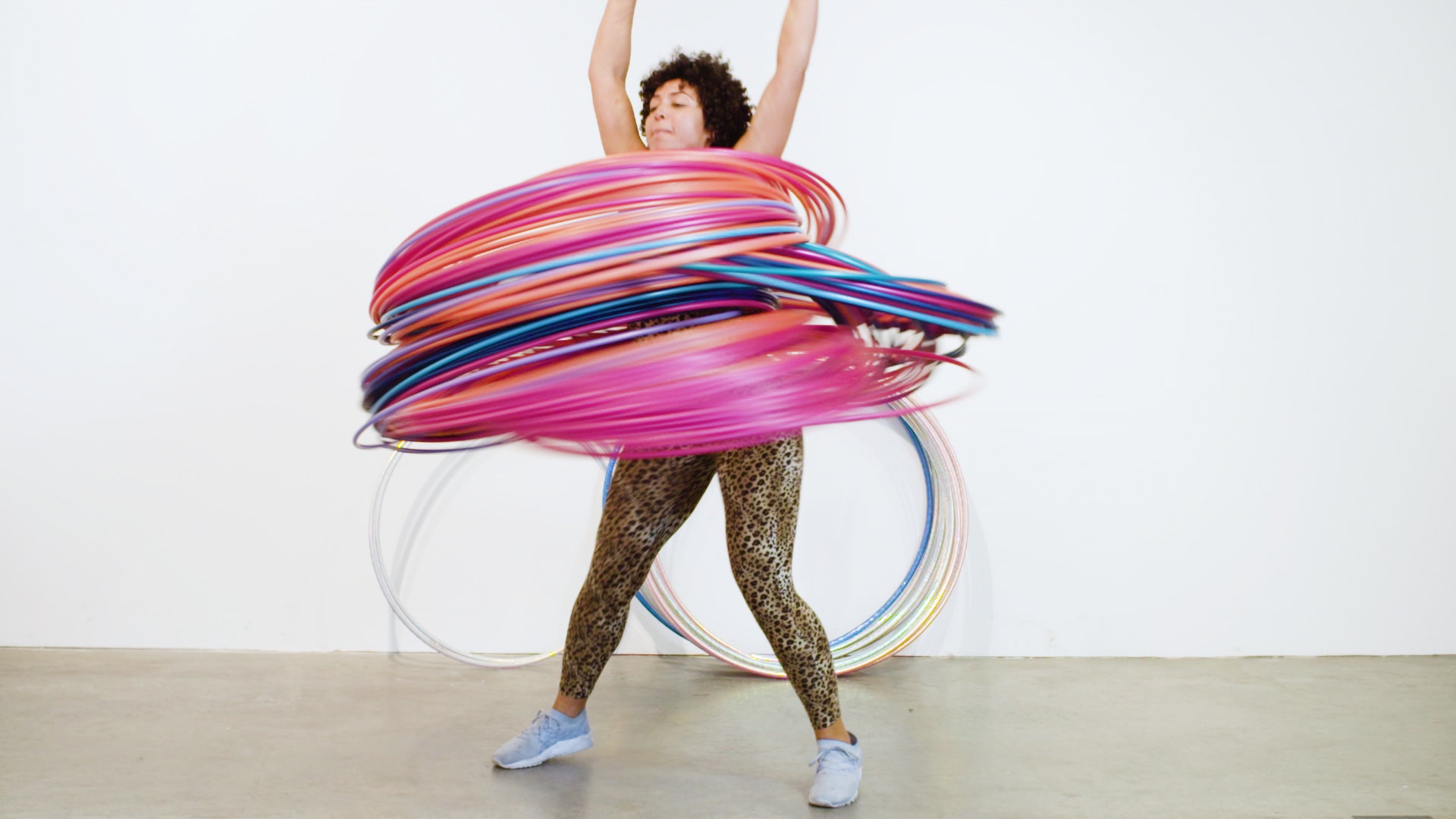 Interesting to note, Wham-O was not able to patent the hula hoop as it had been in use for thousands of years. Merely using a new material did not meet the requirement of originality to secure a patent. They were, however, able to trademark the name “Hula Hoop” in the United States. Wham-O also manufactured slingshots, Frisbees and the ever-popular SlipNSlids, and Superballs.

Hoops were part of the circus world in the 1960’s with Russian and Chinese acrobats in particular incorporating multiple hoops into their acts.

In the 1990s, The Cohen Brothers’ fictionalized the invention of the hoop in a film called The Hudscker Proxy.

Hula Hooping Returns The jam band The String Cheese Incident is widely credited with spurring a renewed interest in hooping. Band members have been throwing hoops into their audiences since the mid-90’s, encouraging their fans to dance, spreading the word and the fun.

Since 2003, the annual Burning Man festival of arts and freedom in the northern Nevada desert has been a hotbed (literally!) of hooping, providing an uninhibited and clothing-optional forum for hoopers from all around the world to share tricks, techniques, and energy. Fire Hooping is encouraged!

Hooping has now found its way into mainstream gyms and studios as a fun and effective form of exercise. Classes can be found all across the US as more and more people rediscover that exercise can be entertaining!

Book on Hooping In 2009, Christabel Zamor, creator of the HoopGirl Workout released a book called Hooping, a Revolutionary Fitness Program, including a DVD.

How to prepare for coronavirus in the U.S. (Spoiler: Not sick? No need to wear a mask.)

After Surviving a Suicide Attempt, This Teen Created the NotOK App to Alert Your Friends When You Need Help

75 Emerging Artists Take Over The Whitney For 2019 Biennial

Here’s what it really takes to get into the Ivy League...