On a recent afternoon in Chelsea a group of teenagers joined hands, bowed their heads and prayed to Idina Menzel.

Yes, Ms. Menzel, who won a Tony Award in June as best actress in a musical for ”Wicked,” has inspired a devoted following at Camp Broadway, a weeklong crash course in jazz hands, high notes and frozen smiles that takes place in Manhattan. If such devotion seems like a joke, don’t tell the self-described Menzelist Tiffany Hallett.

”I don’t know if I believe in God, but I do believe in Idina,” said Ms. Hallett, 15, an aspiring actress from Vernon, N.J., who has seen ”Wicked” 10 times and says she is convinced that foul play was the reason the show lost out to ”Avenue Q” for the best-musical Tony in June. Make no mistake: she is serious about show tunes.

In the rigid social hierarchy of high school, theater kids rate as only slightly cooler than chess players and debaters. Ethan Kasnett, a 14-year-old Menzelist from Potomac, Md., said he was bullied so much for liking theater that he had to change schools. Ms. Hallett also had trouble fitting in. ”I’d be walking in the hall singing lyrics from ‘Wicked,’ ” she said, ”and people would be, like, ‘Dork!’ ”

But at Camp Broadway, there’s nothing strange — well, nothing too strange — about worshiping a woman who puts on green makeup every night to play Elphaba, known elsewhere as the Wicked Witch of the West. ”I love Camp Broadway,” Ms. Hallet said with a peppy laugh, ”because everyone is a theater dork.”

Camp Broadway was founded in 1996 by Susan Lee, who had recently left her job as marketing director at the League of American Theaters and Producers. Ms. Lee, who was looking for a way to entertain her nieces visiting for the summer, recruited some of her theater friends to help teach them about Broadway.

Since then the camp has grown into a national organization, working year-round in cities across the country, including Tempe, Ariz.; Jacksonville, Fla.; and Detroit. In New York this summer, Camp Broadway offered two one-week sessions — one in July and one this week — for students 10 to 17; one master class for more advanced ones, from 13 to 17; and one week of half-day camp for children 6 to 9.

Conducted at Chelsea Studios, a collection of rehearsal rooms that producers often use when casting Broadway shows, the second session finishes today when the campers present their final showcase at a theater in the Haft Auditorium at the Fashion Institute of Technology (226 West 27th Street, Chelsea). The show begins at 4:30 p.m. and is free and open to the public; information, (212) 575-2929.

For the price of admission — $1,050 for the master class (which also requires an audition, complete with head shot and résumé), $950 for older children, $675 for the young ”rising stars” — the campers get classes in singing, dancing and acting; workshops with Broadway professionals like Angelina Avallone, the makeup artist from ”Dracula,” now in previews, and Bill Hubner, the puppeteer in ”Little Shop of Horrors”; a ticket to a Broadway show and a private discussion after the show with its stars; and the showcase performance staged by the camp’s artistic director, Tony Parise.

Will Camp Broadway make a child a star? Wrong question. ”Camp Broadway is not about grooming stars,” Mr. Parise said. ”Competition is a bad word here.”

Mr. Parise, who was in the ensemble of the 1980 Broadway production of ”42nd Street,” is of the ”no such thing as a small part” school of theater. He tells parents that if their child does not get a solo in the final showcase performance, then that will be a good life lesson.

The camp has attracted theater fans from 37 states and 11 countries, including Israel, Korea, Puerto Rico and Egypt. While casual fans and Broadway fanatics are equally welcome, Mr. Parise has noticed a change over the last few years in the kind of kids who sign up.

”Many are more serious about the business,” he said. ”The word has spread that this is the real deal. This is not a baby-sitting service. We conduct rehearsals as if they were professionals.”

Every Menzelist, for example, plans on becoming a Broadway star. And almost every one has a story about how this ambition makes family members or friends a little concerned. ”My parents are always cracking jokes like, ‘You’re going to be a hobo’ or, ‘You better start practicing being a waitress,’ ” said Danielle Strauss, a 14-year-old from Valley Cottage, N.Y., who is absolutely determined to become a star.

Mr. Kasnett added, ”Why do actors always work in the food industry?”

Camp Broadway’s busy five-day schedule is organized around preparing for the Friday showcase. On the first day the students split into two groups — the Nederlanders and the Shuberts — who perform numbers from different Broadway classics. ”The Music Man,” ”Fiddler on the Roof,” ”Guys and Dolls” and ”The Pajama Game” were selected for the July session. The campers also write, choreograph and perform their own spoof of Broadway, which combines elements from two shows, picked randomly.

What distinguishes Camp Broadway from theater camps like the popular Stage Door Manor in upstate New York, the three-week sleep-away camp that inspired last year’s independent film ”Camp,” is that it’s only a few subway stops from Broadway. The camp takes advantage of the proximity by inviting Broadway professionals to drop by, impart wisdom and answer questions.

Soon after the Menzelists prayed and finished lunch, Brian O’Brien, an understudy for the Beast and Gaston in ”Beauty and the Beast,” spoke to the July campers. When he opened up the floor, campers asked tough questions like, ”How much do you make?” and, ”Is it weird that Belle is so much younger than you?” Mr. O’Brien turned red-faced after the latter question and responded, ”Are you saying that I’m old?”

On the day of the final showcase in July, the older campers sat in on the final rehearsal of the youngest, who performed an abbreviated version of ”Annie” with several deviations from the script. Wyatt Welles, who had seen ”Wicked” for the first time earlier in the week, added a new line making reference to the show. ”There’s a future Menzelist,” Ms. Hallett said after the show.

In the afternoon the older kids walked over to the Fashion Institute of Technology to prepare for their final showcase. Almost none seemed nervous; it was difficult to find one camper willing to admit to stage fright. Being in front of an audience is nothing new for most of the campers, whose experience ranges from high school plays to national tours of Broadway shows. And Mr. Parise said novices learned how to prepare for a performance. ”Being confident and not nervous are things that we teach them,” he said. 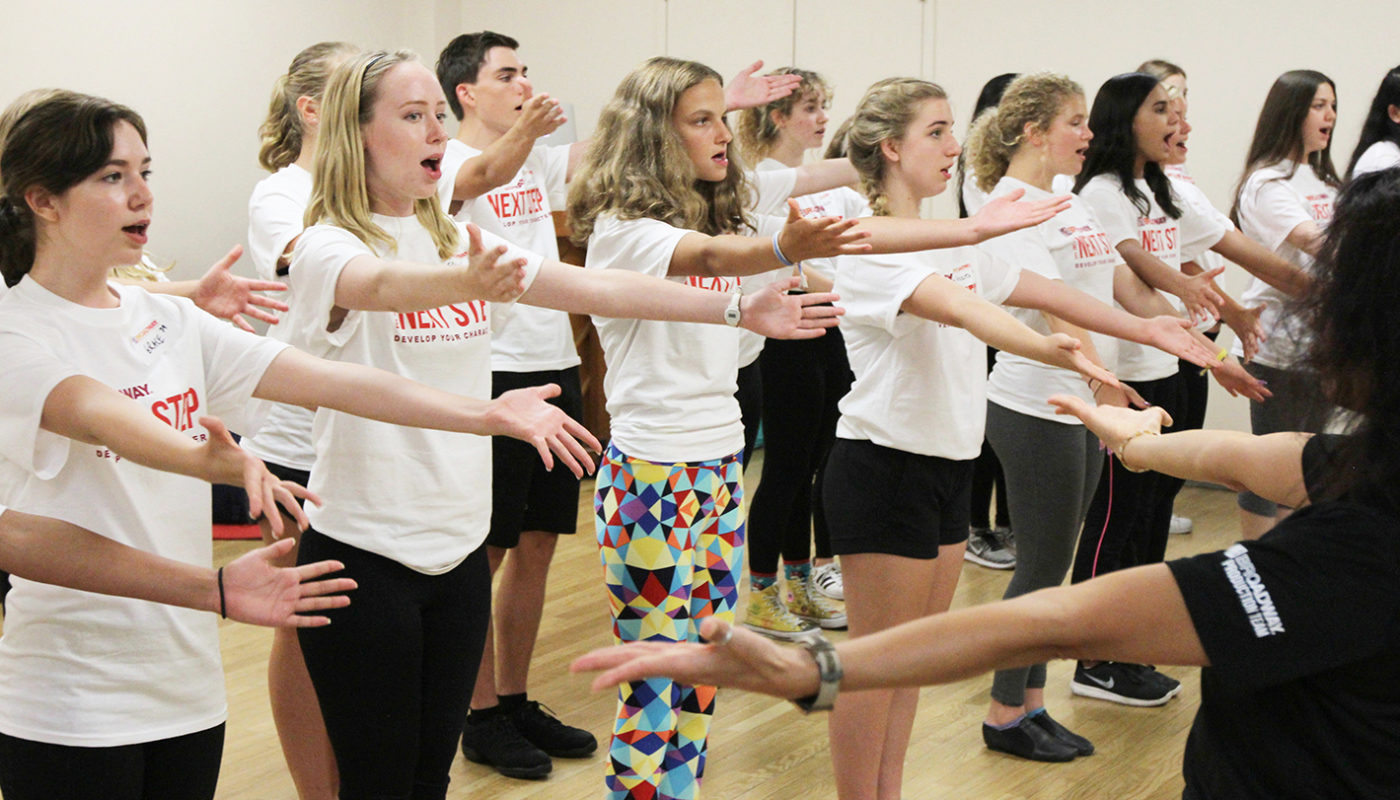 A Taste for Spoofs

After dress rehearsal the campers assembled onstage to listen to Mr. Parise’s final pep talk. ”Have a wonderful time,” he said. ”You are all talented, and remember to smile.”

Parents filed into the theater, took their seats and started turning on their camcorders. Backstage, a rumor started circulating that Donna Murphy, the star of ”Wonderful Town,” was in the audience. ”She’s here, she’s really here!” one girl exclaimed. Also in attendance were Isabel Keating, who plays Judy Garland in ”The Boy From Oz,” and Stephanie D’Abruzzo from ”Avenue Q” — all three of whom were asked to give the campers advice after the show.

While the entire show was well received, the spoofs were perhaps the biggest crowd-pleasers. Mr. Kasnett led one group that combined ”Beauty and the Beast” and ”Aida” into a story about how Belle, the beauty, was sold into slavery. (”Be Our Guest” became ”Be Our Slave.”) In another clever sketch, ”Grease” and ”Mamma Mia!” were conflated to make ”Greasy Mamma.”

After the curtain call, the campers mingled with one another and their parents before exchanging hugs and goodbyes. Danielle Strauss, star of ”Greasy Mamma,” and her mom were two of the last to leave. Asked what she thought about her daughter’s trying to become an actress, her mom, Donna Rabinowitz, looking proud, conceded that she was a little worried about the challenges, financial and otherwise, facing a young girl trying to become a Broadway star. ”She can keep doing it as long as she keeps her grades up,” she said.

Danielle smiled and said, ”She’s coming around to the idea.”

Get the Most Out of Your College Visits

Remembering the time a president threatened to punch a Washington Post...