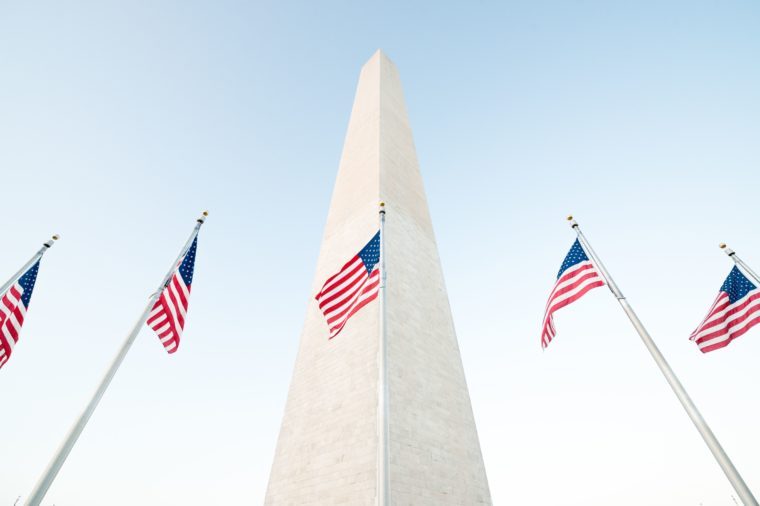 Construction of the Washington Monument in Washington, D.C. began on July 4, 1848, but the first Washington Monument was actually built near Boonsboro, Maryland more than 20 years earlier. According to the Maryland Park Service, on July 4, 1827 most of the town’s 500 residents lent a hand to build a 15-foot stone tower on a 54-foot circular base. Located atop South Mountain and part of the Appalachian Trail, where it still sits today, the monument was completed that September at 30-feet high.

It wasn’t funded by the government (at first) 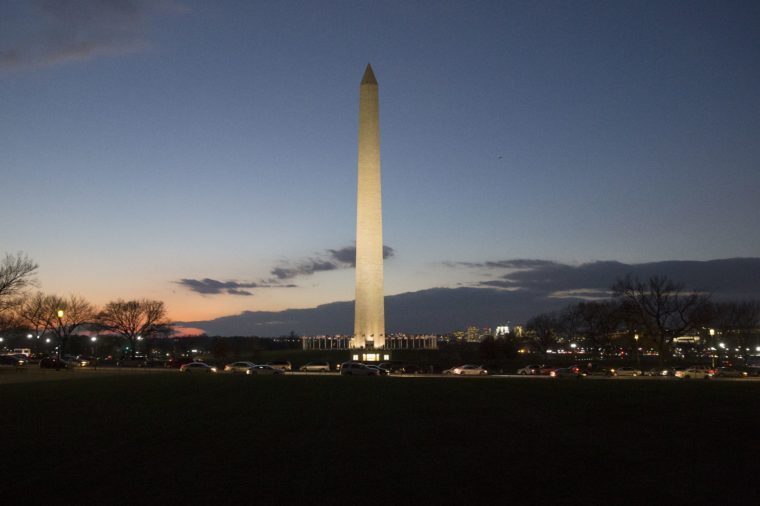 Disappointed that the government never erected a monument of the first president, a private organization called the Washington National Monument Society was founded in 1833 to raise money and get the job done. Unfortunately, they weren’t able to solicit enough donations to finish the project, and construction of the monument came to a standstill in 1854.

It had been abandoned for more than two decades 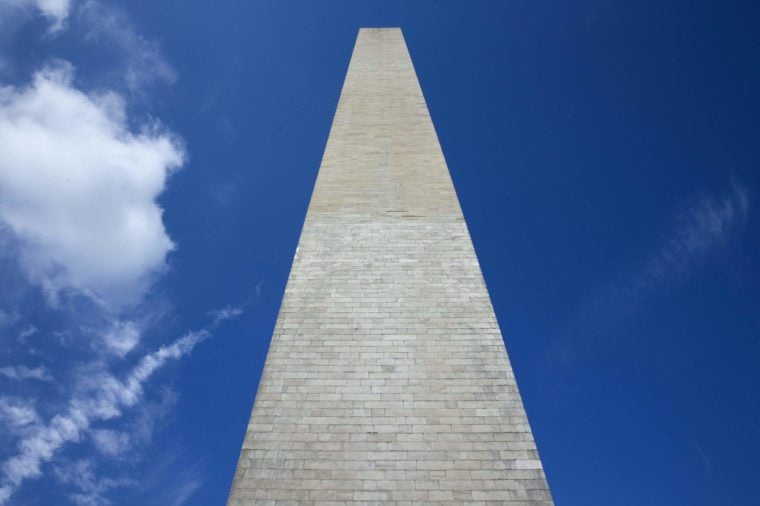 After the Washington National Monument Society’s money ran out in 1854, the tower stood unfinished for more than 20 years. It wasn’t until after the Civil War that Congress was able to provide funding for the second phase of the project, which started in 1879. To make the project cost-effective, the circle of columns and a statue of Washington were nixed. 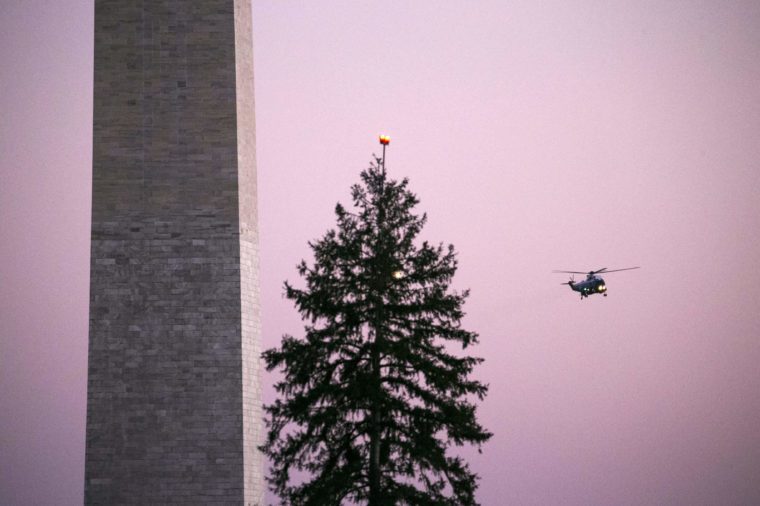 Look closely at the Washington Monument, and you’ll notice that the quarry stone at the bottom of the tower is lighter than at the top. The History Channel explains that the 22-year gap in construction meant the color of the quarry stone wasn’t able to be matched. According to the National Park Service, the stone used during phase two came from quarries in Massachusetts and Baltimore, so they don’t match either. Can you guess the U.S. state by its flag?

It was designed by the nation’s first architect 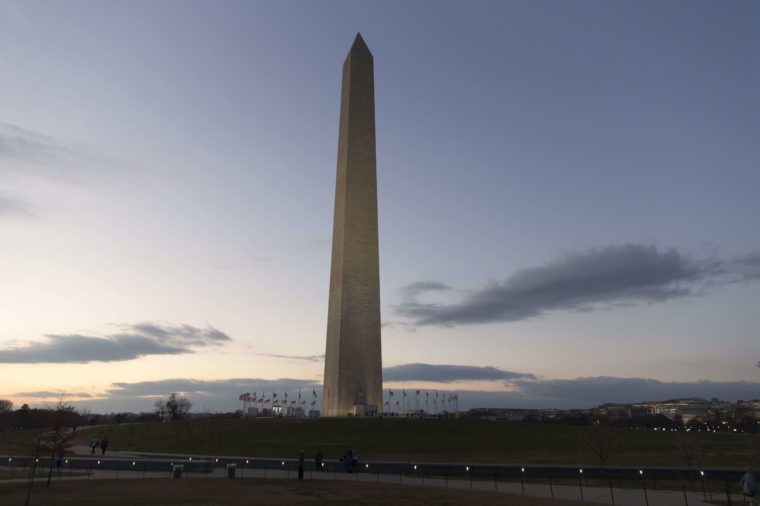 Born in South Carolina, Robert Mills is often referred to as the first native-born professionally-trained architect in America, according to the South Carolina Historical Society. In addition to the Washington Monument, Mills designed many other government buildings, including the U.S. Treasury Building and the Old Patent Office Building, which is now the National Portrait Gallery and the Smithsonian American Art Museum.

The original design was much more elaborate 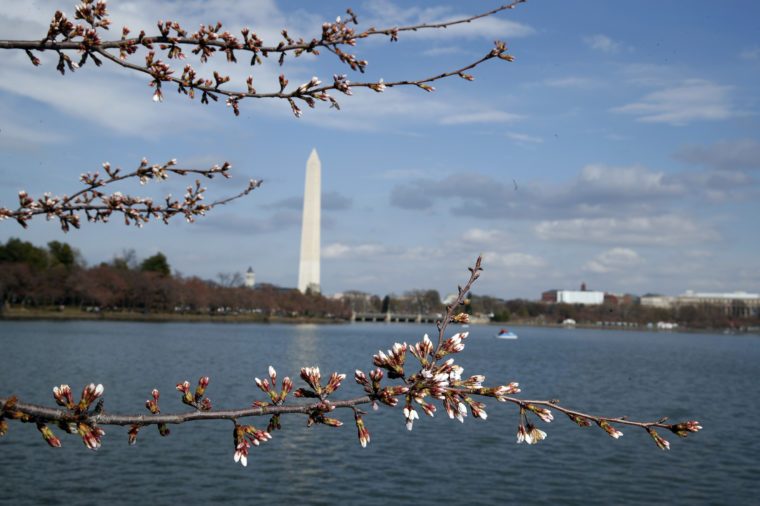 Robert Mills, who was named architect after winning the Washington National Monument Society’s design contest, wanted to build a much more elaborate memorial. His original design called for 30 columns featuring Revolutionary War heroes to circle the 600-foot Egyptian-style obelisk, according to Mental Floss. He also intended there to be a statue of George Washington atop a horse-drawn carriage. 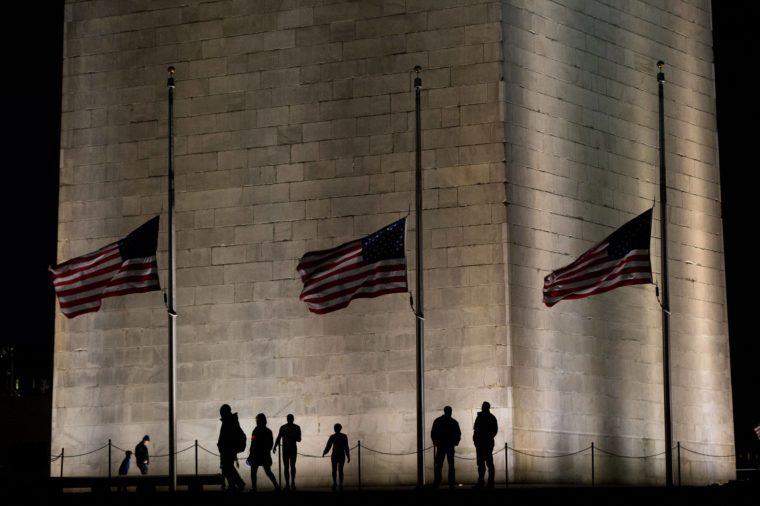 James Buchanan, Andrew Johnson, and a little-known Congressman named Abraham Lincoln were among the 20,000 people in attendance on July 4, 1848, when the cornerstone was laid.

The cornerstone is rumored to contain precious artifacts 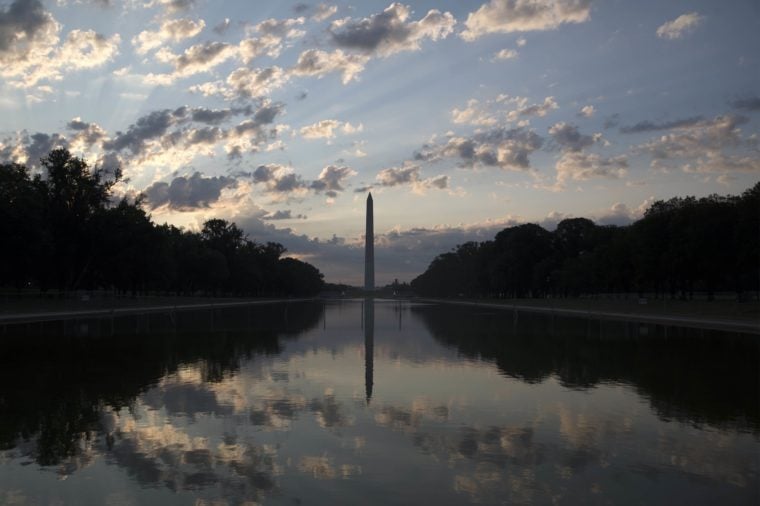 According to The Daily Beast, the cornerstone included a zinc box containing copies of the Constitution and the Declaration of Independence, newspapers from 14 states, maps, all the coins that were in circulation at the time, and a portrait of George Washington, among other historic items.

The National Mall once served a very different purpose 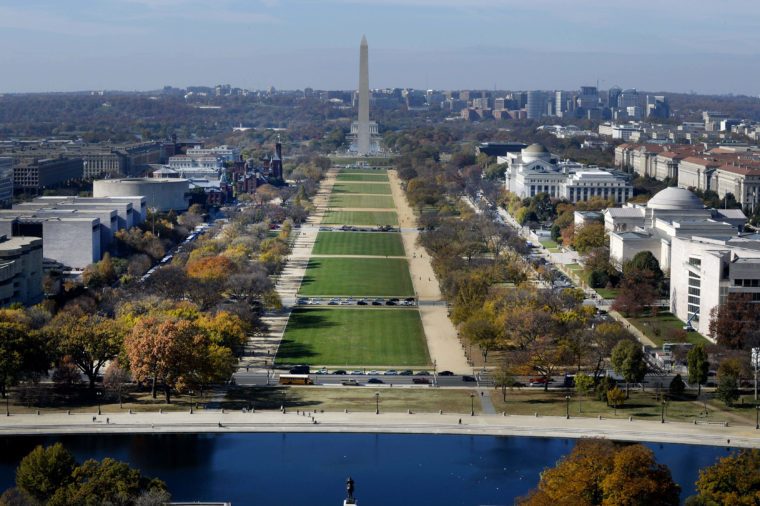 The National Mall, where the Washington Monument sits, refers to the more than 2-mile stretch of grass between the U.S. Capitol and the Potomac River. In an interview with Roots Rated, Mike Litterst, chief communications officer of the National Park Service’s National Mall and Memorial Parks division, explained that before the Washington Monument was built, the grounds were used as a cattle pen and slaughterhouse. During the Civil War, thousands of heads of cattle on the Mall kept Union troops fed.

There’s graffiti inside the monument 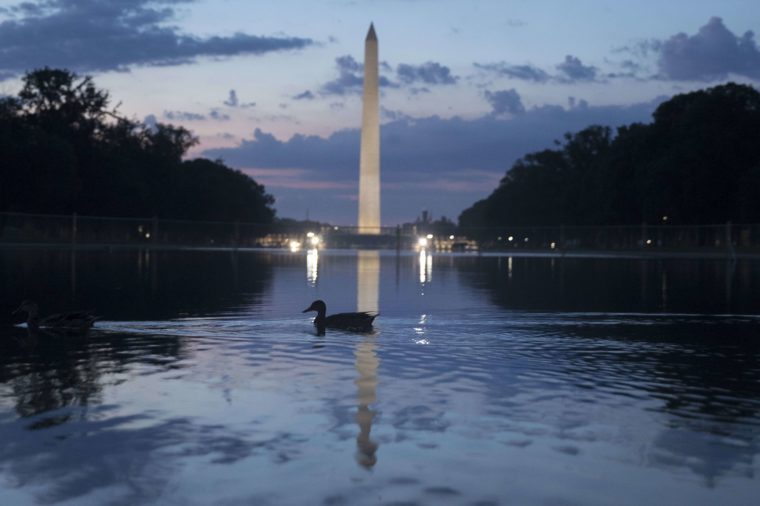 Before the second phase of construction on the Washington Monument began, it had been used as a fort and training ground for Union troops during the Civil War. According to the Washington Post, a soldier named David C. Hickey carved his name into the stone wall. It’s still visible in what’s now the lobby of the monument.

It has an aluminum top 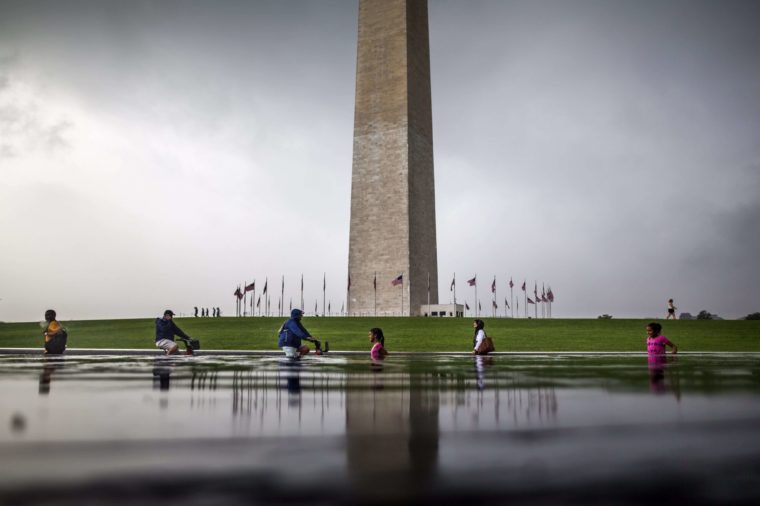 The top of the Washington Monument is actually made of aluminum, which was considered a precious metal because it was so difficult to mine. At the time, it was even more valuable than gold or silver! The 100-ounce aluminum cap acts as a lightning rod, according to The Daily Beast. 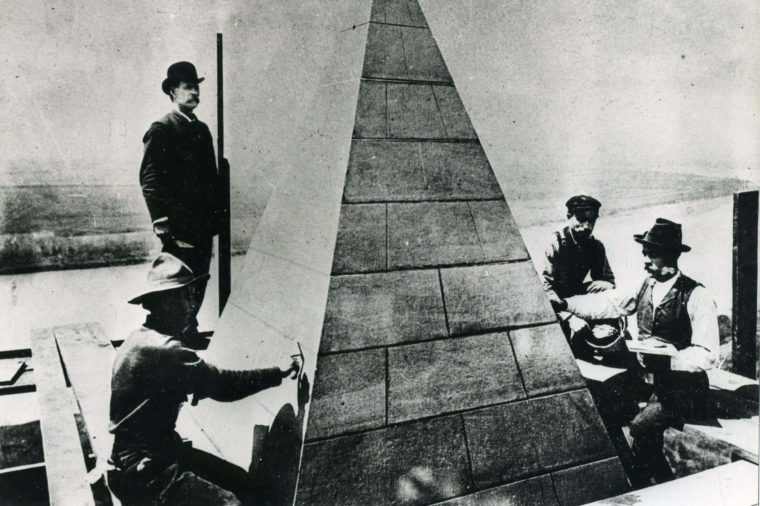 Well, not exactly, but the apex was put on display at Tiffany’s in New York City before it was added to the top of the monument. It was set on the floor of the famous jewelry store so shoppers could say that they walked over the top the Washington Monument, according to Mental Floss.

It was (briefly) the world’s tallest building 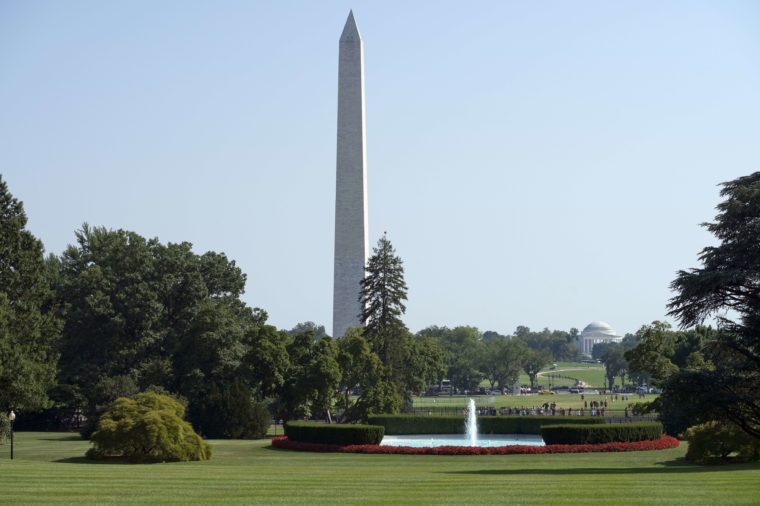 At 555-feet high, the Washington Monument was the tallest building when it was officially dedicated in 1885. The honor didn’t last long, though. The Eiffel Tower stole the title when it opened in 1889 at 986 feet. However, according to Recreation.gov, the monument is still the world’s tallest freestanding stone structure.

It was a slow ride to the top 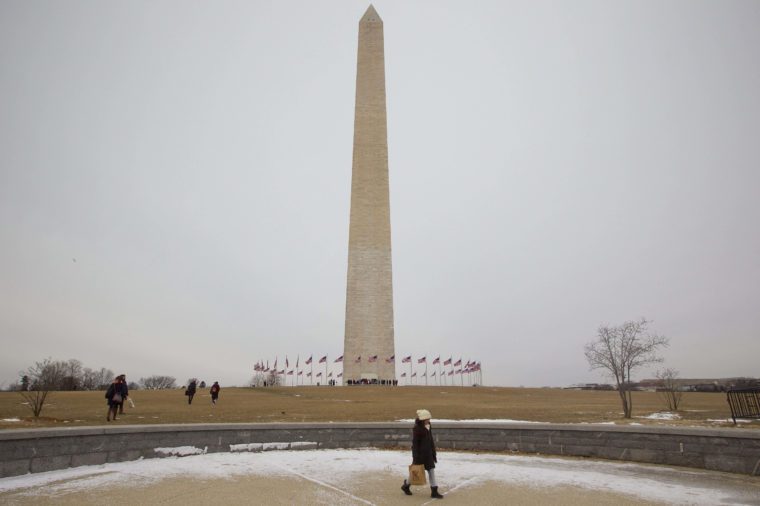 The monument was dedicated in 1885, but it wasn’t accessible to the public until the interior iron staircase was completed the following year. For visitors who didn’t feel like walking, a steam-driven elevator was installed in 1888 and took nearly 12 minutes to ascend to the top of monument, according to the National Park Service. It was replaced by a faster electric elevator in 1901. (By the way, this is the real reason we celebrate Presidents’ Day.)

It survived an earthquake 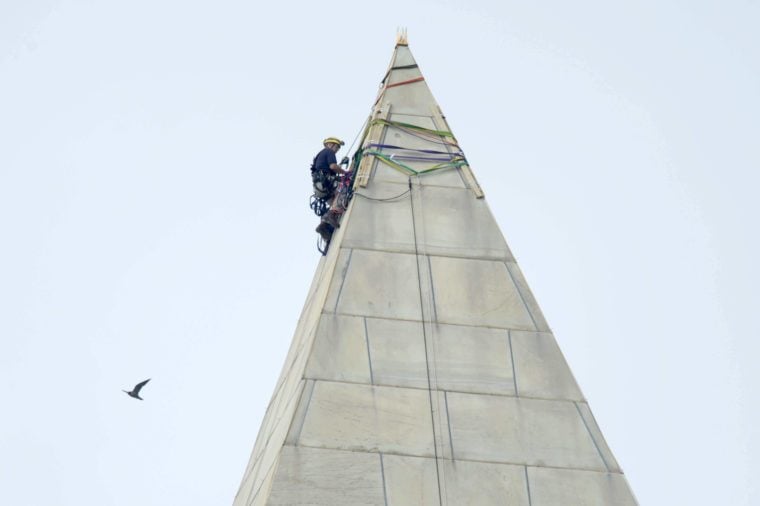 While earthquakes are pretty rare in the Greater Washington metropolitan area, a 5.8-magnitude earthquake hit in 2011 and caused the Washington Monument to sustain significant damage. Between cracks, displaced stones, and loose mortar, the monument had to close to the public for three years. It is currently closed again so the elevator can be upgraded. It’s scheduled to reopen in spring 2019.

The First Trailer for Lin-Manuel Miranda’s In the Heights Movie Suggests...