TKN reporter Alexa takes you behind the scenes at UniverSoul Circus.

The UniverSOUL Circus has everything you’d expect: acrobats…wild animals…and incredible acts form around the world. But what makes is different is that the audience gets to interact MUCH more.

Before you go, here are some circus facts that will completely shock you!

1. Ancient Circus was Totally Different Than the Modern One

We may recognize the circus as an entertaining show with lots of clowns, jugglers, and other performers. However, the real circus was anything but! In fact, circuses can be traced back to Ancient Rome, where buildings and venues were used for races and competitions like staged battles. These races can be found in the form of chariot and horse racing. Back then, people loved to watch these shows. They even like to gamble and bet to predict the outcome of the circus.

2. Circus Maximus was the Largest Venue in Ancient Rome to Hold a Circus

As previously discussed, ancient circuses have a totally different format than the modern ones. In ancient Rome, competitions were held in several venues. The largest (and arguably the most popular) venue was the glorious Circus Maximus. Games that were held in this venue were sponsored by Roman aristocracy and the state itself.

3. Philip Astley was Credited to Revolutionize the Circus Industry

If you really enjoy watching modern circus, you have to thank Philip Astley for that. He’s often credited as the father of modern circus. After getting discharged from the military, Astley decided to open a trick-riding school in 1768. He and his students also perform and gain a lot of attention. Soon after, he decided to further develop the show by adding jugglers and clowns.

In 1782, Astley finally built the first circus in France. Due to the warm reception that he received, Astley was allowed to open a permanent amphitheater in Paris, called “Amphithéâtre Anglois des Sieurs Astley, pere et fils”. After his death, the show was passed on to his son John Astley.

3. Rope Walking is Regarded as the Most Dangerous Circus Act

Most of the acts that we saw on a circus show are dangerous. Each act like sword swallowing to the motorcycle “wall of death” has its own risk. However, none are deemed more dangerous than rope walking, or “the Flying Wallendas”. This performance requires a professional to walk on a thin rope or wire from one point to another.

This stunt is really dangerous, as it is normally done in a very high altitude. As a matter of fact, the first rope walking accident can be traced back as far as 1962. Back then, the performer’s footing failed, resulting in two dead people and one left paralyzed. More accidents and deaths followed since, but it has remained a staple in the circus industry.

When you watch fabulous animals that can do wonders during a circus performance, you can’t help but wonder at the efforts to teach them said skills. Unfortunately, most animals were never treated well during training. They are often beaten, kicked, and confined into small cages to teach them obedience and discipline.

Although Jumbo was always treated like a royal prince, other animals rarely have the same privilege. In fact, when they are not performing, animals will be kept inside a cage just big enough to store them. They can’t move freely and interact like a free animal. Even performing dogs that can be kept as pets are also confined inside cages.

Perhaps, one of the most popular cases of animal abuse in the circus world is the trial of the Ringling Bros. and Barnum & Bailey circus. This case came out after previous allegations from PETA that both circus companies are abusing elephants and other animals. After a long and hard battle in the court, they are finally getting charged of all accusations and have to pay a large sum of penalty.

5. Accidents in Circus aren’t as Often as You Think

Doing dangerous stunts during a performance are always risky. It’s safe to say that their lives can be at stake. However, modern circuses have a low injury rate. Overall, a show’s injury rate is 9.5. although there are a lot of minor injuries that can be sustained during a show.

They are not bad enough to sideline performers from the next show.  The study, done by NCBI, even said that injury rates for circus performers are even lower than many other National Collegiate Athletic Association Sports.

You need to have guts of steel to be the assistant to a knife thrower. It’s human instinct to flinch when someone throws a weapon at you, so you need a lot of confidence in your partner. The performances are a hit with audiences, but require training and skill to ensure the force, spin, and speed of the knife are perfect each time.

A more extreme version of this act was known as the “Wheel of Death,” and it’s just as terrifying as it sounds. The target was blindfolded and affixed to a spinning wheel, at which their partner threw knives. Not only did this increase the fear aspect, but also audience anticipation.

7. Sword swallowing is a lot more difficult than you think

If you’re like us, you’ve always wondered how illusionists are able to swallow strange objects, such as swords. As it turns out, it’s not an illusion at all, but a trick of the muscles called peristalsis.

Peristalsis is the act of relaxing the throat’s 50 pairs of muscles, so you’re able to slide objects down the esophagus. The majority of entertainers require lots of training to reach this point, so they start with less intimidating objects. 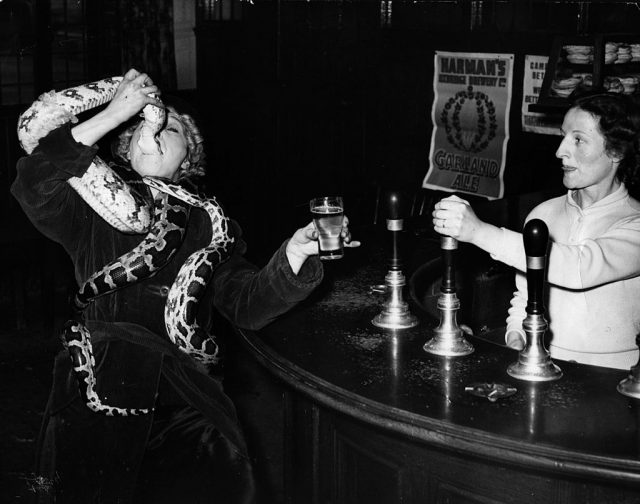 In order to ensure the sword goes down smoothly, most lubricate it with vegetable or olive oil. Knowing how sword swallowers do what they do makes other circus acts, such as the swallowing of live snakes, much more understandable – just not logical!

Contortionists have the ability to awe audiences and twist their bodies into poses reminiscent of terrifying movie creatures. They’ve long been a staple of the circus, but did you know the art dates back hundreds of years?

Contortion places its origins with the Mongolians, Russians, and Chinese, but depictions can be seen in art from ancient Egypt, Greece, and Rome. In Mongoliaand China, the skill was mastered by traditional Buddhist Tsam dancers, and its success spurred its expansion to other areas of society.

Today, contortion is largely seen as a merging of Western and Eastern influences. While it was largely done by females in the past, it has since expanded to include males who show an abnormal amount of movement and skill.